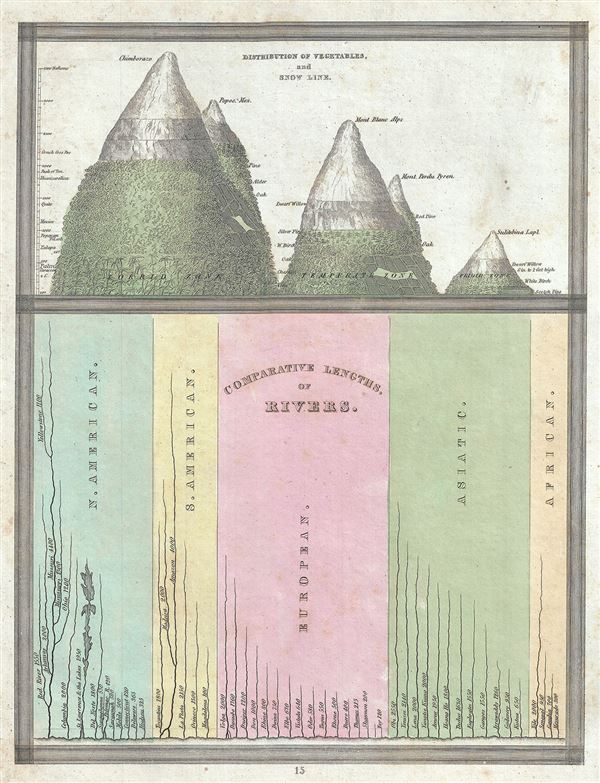 This is a fine 1835 comparative map by the important American mapmaker T. G. Bradford showing the comparative lengths of the principal rivers in North and South America, Europe, Asia and Africa. A large inset in the top half of the map notes the comparative heights of mountains, snow level, and distribution of vegetation in each of the three zones (Frigid, Temperate and Torrid). The map details the world's great rivers in relative to one another and divided by continent. The rivers have been necessarily straightened to indicate their lengths. The Mississippi is considered, by far, to be the world's longest river. The length of the Nile is grossly underestimated - when this was made the source of the Nile had yet to be determined. The St. Lawrence River is drawn to include four of the five Great Lakes.

The map was published as plate no. 15 in Thomas G. Bradford's 1835 Comprehensive Atlas Geographical, Historical and Commercial.  Bradford's atlas, published in 1835 was an important work on many levels.  First, it was one of the first American atlases to follow an encyclopedic format, offering readers extensive geographical and statistical tables to supplement the maps themselves.  Second, it was published in Boston and influenced the city's rise as a publishing center later in the 19th century (at the time most publishing in the United States was restricted to New York and Philadelphia).  Third, this atlas was the first to contain a separate and specific map showing the Republic of Texas.  Fourth and finally, Bradford's atlas in some instances broke the Euro-centric mold regarding atlas production.  Among other things, Bradford focused his atlas on the Americas and abandoned the classical decoration common in European atlases in favor of a more informational and inherently American approach.