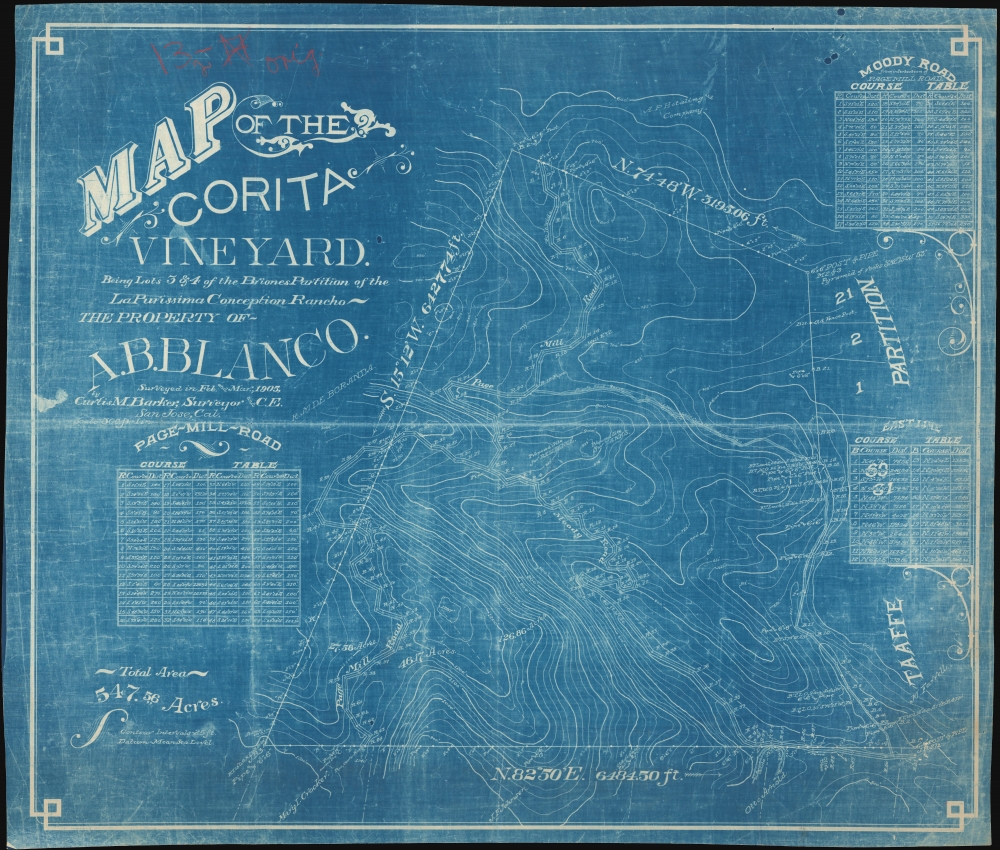 This is a c. 1912 printing of a 1905 Curtis M. Barker map of the Foothills Preserve and Foothills Park in Los Altos and Los Altos Hills, California. Then known as the Corita Vineyard, the map depicts the area in the immediate vicinity of the intersection of Moody Road and Page Mill Road. Course tables detail both Page Mill Road and Moody Road, providing distances in feet between markers along each road. Contour lines present the topography in twenty-five-foot intervals. Two notations, just above the intersection of the two roads, mark proposed sites for a residence and tanks. An addition appears to have been made to the original map in 1912, hence our date for this example, of a private road surveyed by J. V. Neuman that was constructed later that year.

No record of the Corita Vineyard appears online, but we have been able to piece together some of the historical context. The story begins in 1840 when 4,439 acres of land in this area were given as a land grant to José Gorgonio and his son José Ramon by Governor Juan Alvarado of Mexico, which they named La Purissima Conception Rancho. Gorgonio sold Rancho La Purisima Concepcion to Juana Briones Miranda in 1844. Briones (1802 - 1889) sold three-quarters of her rancho to Martin Murphy Jr. of Sunnyvale in 1861. She gave the remaining 1,130 acres to her children, who went by their father's name, Miranda. A. B. Blanco owned the Corita Vineyard in 1905.

Cyanotype: Why So Blue?

Cyanotype is a photo-reprographic technique developed in 1842 by the British astronomer John Herschel (1792 - 1871). Sometimes called a 'sunprint,' the technique employs a solution of ferric ammonium citrate and potassium ferricyanide, which painted on white paper or cloth, reacts when exposed to sunlight to dye the object a brilliant blue. Areas blocked from ultraviolet exposure remain undyed and white. Herschel developed the technique to reproduce his astronomical notes, but others quickly realized that any object capable of blocking light could be used to quickly and easily create a cyanotype image. By the late 19th century, the process became popular with designers, military, architects, and engineers (blueprints), who used the cheap an effective technique to quickly and accurately reproduce images in the field. Cyanotyping is limited in that only a single copy can be made at one time, so it was only practical for short-term fieldwork. It is also of note that cyanotypes remain extremely reactive to light and, over time, fade or degrade, making them extremely ephemeral. The process fell out of fashion in most places by the 1920s, but remains in use in some parts of the world, such as India and Nepal, to this day.

After studying the map, we believe Curtis M. Barker conducted the original survey in 1905, likely for A.B. Blanco himself. Since Barker died in 1908, Blanco could not rehire him to survey the new road he wanted to be built in 1912. Hence the other surveyor's name, and, from the way the cyanotype has been printed, we believe this new road was added directly to the original map created by Barker. Then this cyanotype was reproduced from that original. This is the only known example.

Curtis Mason Barker (April 12, 1861 - August 4, 1908) was an American civil engineer and surveyor. Born in Detroit Michigan, Barker was the third of three children. His father, Kirkland Charles Barker (September 8, 1819 - May 20, 1875) was a successful businessman in Detroit who owned the American Eagle Tobacco Works there. He also served as mayor of Detroit from 1865 - 1867. Curtis Barker was educated at the Michigan State University at Ann Arbor (today known as the University of Michigan), where he studied civil engineering and surveying. After graduating, firm in the belief that his job prospects were better further west, Barker moved to Colorado where he worked in the mines and as a surveyor for railroads. He moved to California in 1885, and lived and worked in Palo Also as an assistant civil engineer on the construction of Leland Stanford University. He then moved to San Jose in 1894 and opened his own surveying and civil engineering firm. Soon after moving to San Jose he was appointed city engineer and held the position until July 1, 1902. He died on August 4, 1908, when he drowned in Halfmoon Bay along the California coast while yachting. It is unclear if his death was an accident. Curiously, his father drowned while yachting on the Detroit River when Barker was a child. Barker married Zoe A. Campbell in 1883, with whom he had two daughters. Learn More...

Very good. Cyanotype.
Looking for a high-resolution scan of this?