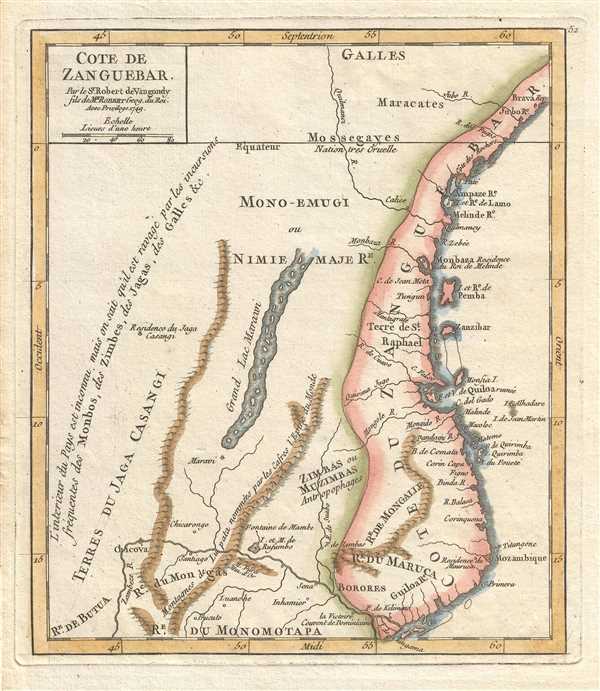 This is a hand colored 1749 Didier Robert de Vaugondy map of Kenya, Tanzania, Mozambique, and Malawi, and Zanzibar. The map presents the African coast from just north of the Equator to Mozambique and from the 'unknown interior' of the continent to the Indian Ocean. An incomplete, embryonic depiction of Lake Malawi (Grand Lac Marawi) is at the center of the map. Though Lake Malawi had not yet been 'discovered', it had appeared on early maps of Africa, including Emmanuel Bowen's 1747 A New and Accurate Map of Africa. Lake Malawi was not officially discovered until Portuguese trader Candido Jose da Costa Cardoso stumbled upon it in 1849 – one hundred years after Vaugondy's representation here. Vaugondy's and Bowen's inclusion of Lake Malawi is most likely a prescient interpretation of indigenous reports brought to Europe by 17th century Portuguese traders. Its form would be followed by subsequent cartographers well into the mid-19th century when the explorations of John Hanning Speke, David Livingstone, Richard Francis Burton and others would at last yield a detailed study of Africa's interior.

The Zanzibar archipelago, which lies off the coast of Tanzania, is made up of two islands, Unguja (usually referred to as Zanzibar) and Pemba, which is also labeled here. Zanzibar has a long history, and was most likely mentioned in a Greco-Roman text which dates from between the 1st and 3rd centuries AD. In 1749, when Didier Robert de Vaugondy composed this map, Zanzibar was under the control of the Sultanate of Oman. Zanzibar and Pemba became British protectorates in 1890, and remained so until 1963, when it became an independent country within the Commonwealth. In April 1964, the People's Republic of Zanzibar and Pemba merged with Tanganyika to become the United Republic of Tanzania.

Several cities are labeled, including Mombasa (Monbaza), Kenya. Mombasa has a note associated with it, stating that it is the residence of the Roi de Melinde, who appears in Rabelais's work La vie de Gargantua et de Pantagruel. Numerous rivers and tributaries are depicted, including the Zambeze River near the bottom of the map. Different regions of the map are labeled as belonging to a certain tribe. A note is included along the left border which states, 'The interior or the country is unknown, but it is known that it is ravaged by frequent incursions by Monbos, Zimbes, Jagas, Galles, etc' (L'interieur du Pays est inconnu, mais on sait qu'il est ravage par les incursions fréquentes des Monbos, des Zonves, des, Jagas, des Galles, etc.).