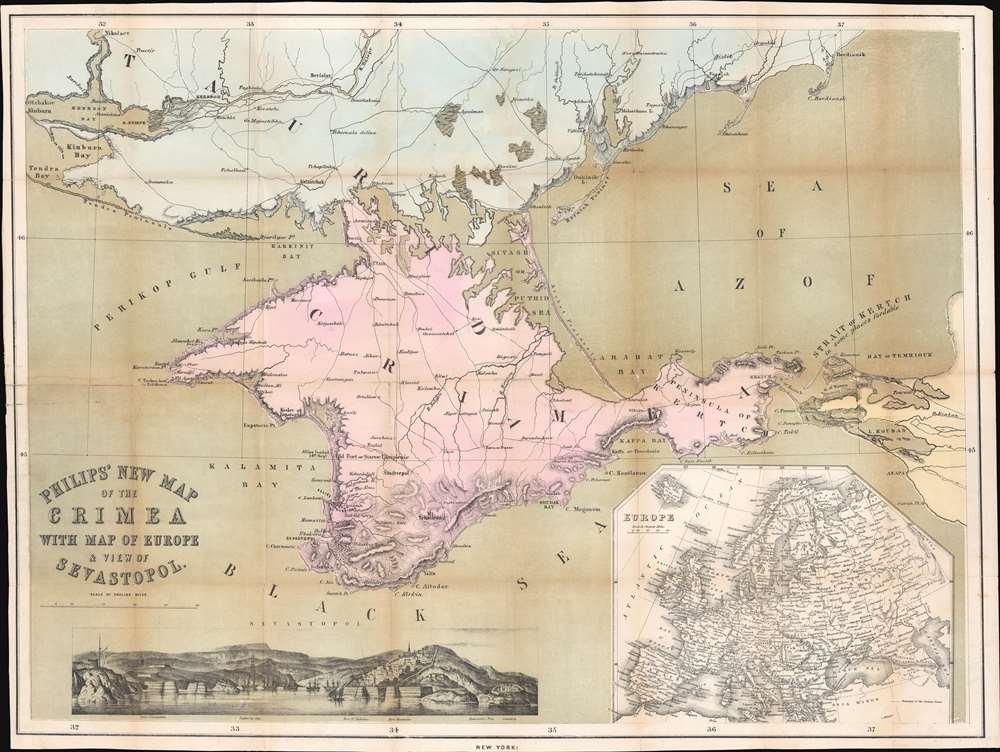 This is a striking 1854 George Philip map of the Crimean Peninsula (Crimea) during the Crimean War. Coverage extends from the Dnieper River to the Black Sea, and from Tendra Bay to the Sea of Azov. Text near Kalamita Bay follows the action of the Crimean War. A notation marks where the Allies landed on September 14, and another indicates the site of the Battle of the Alma and Allied and Russian positions. Sevastopol, the Allied objective, is identified at the bottom of Kalamita Bay. A view of Sevastopol is situated along the bottom border. Within the view, three forts, the cemetery, and a lighthouse are named. An inset map of Europe in the bottom right situates Crimea in relation to continental Europe.

Hostilities erupted in July 1853 when Russia invaded two Ottoman suzerainties known collectively as the Danubian Principalities: Wallachia and Moldavia. The Ottomans immediately responded and fought a defensive campaign that eventually halted the Russian advance at Silistra, which the Russians besieged. Alarmed by the possibility of an Ottoman collapse, the British and French jumped to their aid, sending troops and supplies to Gallipoli. They did not arrive at Silistra until after the Russians had withdrawn.

At this point, public opinion at home, where discontent aroused by the wasted effort and expense of sending armies to the Balkans, exerted an influence on the alliance. This outcry led to the planning and execution of an invasion of the Crimean Peninsula and a siege of the Russian naval port of Sevastopol, their primary naval base in the Black Sea. The siege lasted eleven months. Russia finally sued for peace in March 1856. In the Treaty of Paris that ended the war Russia lost its Black Sea ports, Wallachia and Moldavia gained a modicum of independence, and Christians in the Holy Land were given a degree of equality.

This map was created and published by George Philip in 1854. We note a single example cataloged in OCLC which is part of the collection at the National Library of Scotland.