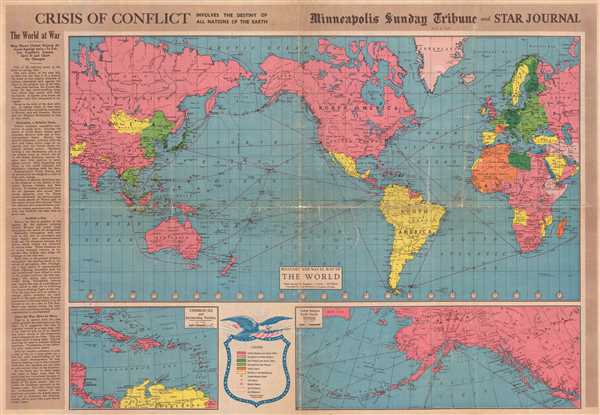 The world as it was at the outset of American combat operations during World War II.
$450.00

This is a 1942 Minneapolis Sunday Tribune and Star Journal map of the world at the outset of American involvement in World War II. With North America at center, the map depicts the world from Central Asia across the Pacific to the Americas and then across the Atlantic Ocean to Europe and back to Central Asia. Intended as an aid for readers of the Tribune and Star Journal, each country is shaded in the color representing the alliance of which it was a member or by which force (Allied or Axis) currently occupied a given country. Allied nations and those occupied by the Allies are colored shades of pink, while nations belonging to or occupied by the Axis are colored with shades of green. Neutral nations are colored yellow, allowing them to stand out in stark contrast to the rest, while Vichy France and its possessions are orange, signifying the unique (and precarious) position held by Pétain and the Vichy regime. The Tribune and the Star Journal hoped that their readers would keep this map and use it to track the developments during 'the greatest war of all time'. The Tribune and the Star Journal suggest using push pins to track movements and changes in territory, as events have the potential to change quickly.

As of this map's printing, most of Europe had been conquered by the Axis and the Japanese were steamrolling through Southeast Asia and the East Indies. Fighting raged on the Eastern Front between Germany and the Soviet Union, while American air and sea power had engaged the Empire of Japan throughout the Pacific. American ground forces would not engage in combat until the Battle of Guadalcanal, which would not begin until August 1942.

Numerous aspects of this map would allow for the every-day viewer to have a much better understanding of when and where events during the war took place. Time zones are illustrated and labeled on the main map, indicating the time difference from Minnesota to the combat zone, either in the Pacific or Europe. Every country is labeled, along with the archipelagos in the Pacific and even individual islands. Air and sea routes across the globe are rendered as well and include the distance (in miles) from one point to the other. Cities and towns throughout the world are also labeled, making it easy for someone to locate a far-away city currently in the news. Two inset maps are included along the bottom border. One, situated on the bottom left, depicts the Caribbean and the eastern approach to the Panama Canal, a very strategic asset for the United States, which was fighting in both the Atlantic and Pacific Oceans. Without control of the Panama Canal, vessels wanting to travel from one ocean to the other would have to round Tierra del Fuego, a time-consuming and dangerous endeavor. The other, on the bottom right, illustrates the Aleutian Islands in Alaska, believed by the Tribune and the Star Tribune to 'point like a gun barrel toward Japan'. A key explaining the colors and symbols utilized on the map is situated in between the two inset maps along the bottom border.

Average. Newsprint. Professionally backed on archival tissue to provide stabilization. Cracks and tears along original fold lines. Displays one five and one half inch tear in Eastern Hemisphere and one six inch tear in Western Hemisphere. Text and photographic content on verso.
Looking for a high-resolution scan of this?