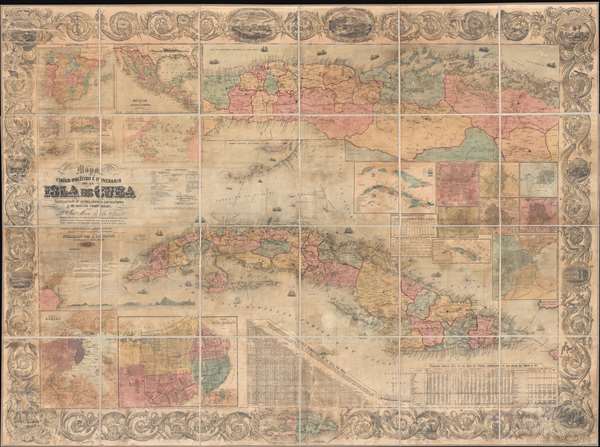 This collaborative project brought together the best of Cuban and American cartographic publication in the form of Torre's mapmaking skills and Colton's masterful engraving and publishing abilities. Cartographically Torre derived the map from multiple sources including Francisco Coello de Portugal y Quesada's map of 1859 and Spanish Direccion Hidrografía maps. Stylistically the map is typical of Colton's early large-format separate-issue map work, comparable to his map of 1859 map of Bolivia and his 1836 map of New York. It bear's Colton's distinctive acanthus leave border work with inset vignettes of the Cuban countryside.


José María de la Torre y de la Torre (September 1, 1815 – December 23, 1873) was a highly respected Cuban geographer, archeologist, historian and pedagogue. Torre was born in Havana and proved precocious as a child, graduating with a degree in jurisprudence and law at just 17. From as young 12, he worked with his uncle, Antonio María de la Torre, organizing and researching historical maps and documents relating to Cuban history. His first published map, Mapa Antiguo de la Isla de Cuba issued in 1833 when he was just 18, was a historical map of Cuba illustrating not only the European experience in Cuba, but also indigenous civilizations on the island at the time of Columbus. He worked with numerous Cuban newspaper and published works on history, archeology and geography. In 1848, the Cuban government sent him to the United States and Europe to study technological and agricultural advances that could be introduced to Cuba. There he joined the Royal Academy of History in Madrid and the Geographical Society of Paris, as well as other antiquarian and scientific learned societies. Torre died at sea in 1873.