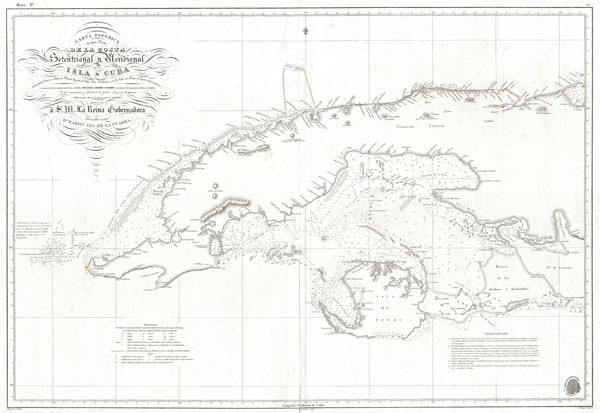 This is a dramatic and exceptionally rare 1854 nautical chart or map of the western part of Cuba by the Spanish mapping agency, Direccion Hidrografica. Covers the West India island from Cape San Antonio eastward as far as the Gulf of Cazones. Includes the Isla de Pinos and the city of Havana. Chart offers countless depth soundings as well as notes on the construction of the chart and navigation. Offers some inland detail, identifying a number of important mountains as well as the villages of Guanajayu, San Antonio de los Banos, San Antonio de Bedia, Manajau, Madruga, and countless others. While generally a black and white chart, lighthouses are noted with splashes of yellow and red color. A directional title cartouche appears in the upper left quadrant. The logo of the Direcction Hidrografica appears in the lower right quadrant.

This map was prepared by a party under the command of the Spanish marine, Angel Laborde y Navarro . It was ordered by Don Ramon Gil de la Cuadra, head of the Direccion Hidrografica. Published in 1837 and updated to 1854.


Ramon Gil de Cuadra (1775 - 1860) was a Spanish scientist and politician active in the early 19th century. Gil de Cuadra traveled extensively throughout the world including documented voyages to North America, South America, the Philippines and British India. He was part of the Spanish embassy to the United States to define the limits to Spanish possessions in the New World. Later, Cuadra is known to have lived for a time in England before returning to Spain in 1836 to accept a commission as the minister of the Interior-Portfolio Direccion Hidrografico. He also served as a Royally appointed Senator-for-life, Director of the Navy, and Minister of the Interior of the Peninsula.


Angel Laborde y Navarro (August 2, 1772 - April 4, 1834) was a Spanish Marine and Naval Commander active in the early part of the 19th century. Navarro had a loud and distinguished military career and was active in numerous naval campaigns, most of which were in the Caribbean. Navarro established a reputation as a cleaver tactician and strategist able to find a path to victory in even the most dire circumstances. In 1832, near the end of his days, he was appointed Minister of Marine by Royal Decree. Though he maintained the position for only two years, he instigated a number of important surveys and wrote a book on naval combat. In 1833, for his accomplishments, he was awarded the Cruz de Isabel la Catolica, a high military honor. Navarro died in Havana, Cuba, in 1834.