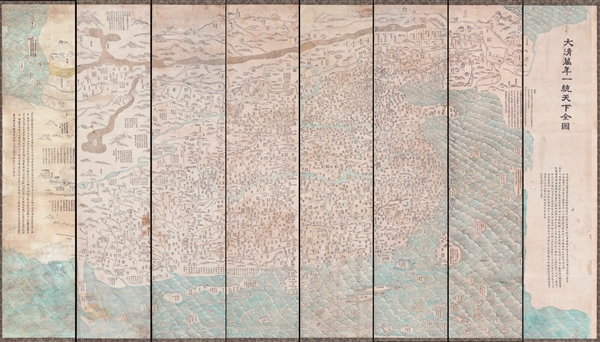 A cartographic expression of the Qing tribute system, this is the earliest known printed example of the 'Tianxia Quantu' map of Qing China.

A seminal 1806 (Jiaqing 11) Qing Dynasty Chinese map of utmost importance and rarity, this is the earliest known printing of Huang Qianren's (黃千人, 1694–1771) grand and spacious map of the Great Qing Empire of China. Huang Qianren first drew this map during the Qianlong Reign in 1767, but unfortunately no examples of that edition survive. The map was reintroduced in manuscript form by Huang Zhengsun in the year 1800 to memorialize the Qianlong Emperor's life. The 1800 manuscript issue exists in only one example at the Beijing National Library. Afterwards, revised woodblock printings were issued to celebrate important moments in the expansion of Qing influence. Issued 5 years before the famous 1811 'blue map,' the present example is the earliest known printing of Huang's map. This series of Qing maps, generally referred to as Tianxia Quantu, dominated Chinese cartography during the Jiaqing Reign (1760 – 1820) and persisted well into the reign of the Daoguang Emperor (1820 – 1850). The term Tianxia Quantu refers to that portion of the title that most eloquently summarizes their underlying purpose as 'unified under heaven,' heaven being Qing China.

An initial examination of the easily recognizable portions of the map suggests an expansive coverage extending from Siberia to Borneo and from India to Korea. Closer examination, nonetheless, reveals that this is in fact a map of the world, scaled not in terms of distance, but rather in terms of degree of subjugation to and importance to Qing China. The map is read, like traditional Chinese texts, from right to left, with the most densely detailed regions corresponding to the eastern shores of China. At the far west, in the distant upper left hand corner, European countries like Holland, Portugal (Land of the Great Western Sea), possibly Italy, Arabia (Homeland of Islam), Africa (Land of the Black Ghosts), the Mediterranean (Little Western Sea), and even the Atlantic (Great Western Sea) are identified. Surrounding the map are textual annotations describing the subject peoples of various regions. The annotations identify not only the people, but the great distances their leaders travel, the great hardships they endure, and the gratefulness with which they suffer, to pay tribute to the mighty and culturally superior Qing. Thus the map takes on meaning as a ceremonial and administrative embodiment of Qing rule and the tribute system. The Manchu Qing were a nomadic people who did not visualize themselves limited by geo-political boundaries – and aptly there are none on this map – rather, their territorial dominion extended to wherever they exerted influence, and the significance of all other lands correspondingly diminished or increased according to that influence. A noted by Richard Pegg,

This 'complete' map minimizes the European notion of a map of the world, its centralized and marginalizing construct confirm the Qing / Chinese notion of the Central Kingdom (Pegg, R., Cartographic Traditions in East Asian Maps p. 19)

. A key to the right of the map helps to understand the map and identify its iconography. Although the translations are our own we are indebted to Richard Pegg, see above, for helping to define the administrative terminology. Through this legend the practical purpose of the map becomes evident. This is how the Qing Emperor would have wanted to see his world. Here Qing power and culture are expensive, extending via a well-run administrative and tribute system throughout the entire empire and beyond. Practical, ceremonial, and administrative needs are thus addressed and magnificently amalgamated into an astounding and influential masterpiece of cartography.

Although others may be discovered, there currently several known variants of this map:

Qianren Huang (黃千人, 1694 – 1771) was a Chinese cartographer active 18th century during the reign of the Qianlong Emperor. He was born in Yuyao, Zhejiang, China. He passed the state civil service exam for Tai-an and was awarded a position as a clerk. His grandfather was the great Qing Chinese polymath and 'Father of the Chinese Enlightenment' Huang Zongxi (黄宗羲) (1610-1695), father of Huang Baijia (黃百家) (1643-1709). He is best known for his 1767 revision of Huang Zongzi's map  天下舆图, published as DaQing Wannian Yitong Tianxia Quantu (大清万年一统天下全图)or All-Under-Heaven Complete Map of the Everlasting Unified Qing Empire.

Mounted on 8 scrolls. Some staining as seen in image. A few minor repairs. Overall soiling. Measurement is for map only and does not include the scrolls or space in-between the scrolls.