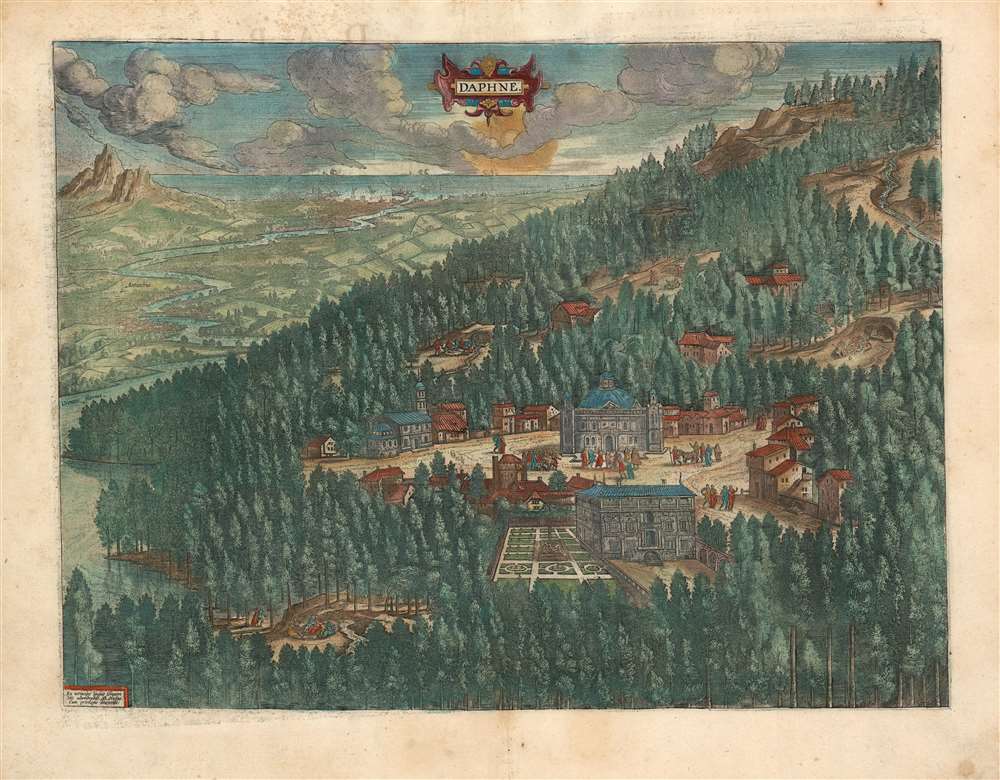 A Semi-Legendary Sanctuary and Paradise on Earth (near Antioch).

This is a lush example of Ortelius' 1595 engraving of the wooded parks and stately temples of Daphne, a classical paradise. At center is the temple to the Pythian Apollo: not visible here is Diocletian's companion sanctuary to Hecate, constructed (appropriately) underground. Four freshwater springs can be seen in clearings in the woods, with revellers taking the waters, dancing, playing music, drinking, and embracing, a hint given by the straitlaced Flemish engraver of the loose morals for which Daphne had unjustly become (in)famous.

A slighted Eros had shot the god Apollo with a gold arrow to make him love the nymph Daphne, and had likewise shot Daphne with a lead arrow to make her hate Apollo. Divine arrows notwithstanding, Daphne, had chosen perpetual virginity, and fled Apollo's advances. Her river god father transformed her into a laurel tree to spare her the amorous intentions of Apollo, who had to make do with declaring the laurel tree sacred, wearing laurel in his hair and making his arrows from her limbs. Audiences contemporary to both the story's classical recounters and Ortelius interpreted this tale as a love story in a way that a modern audience might not. Considering what Apollo's father got up to, it is not hard to assume the apple didn't fall far from the tree.

As with his view of Tempe, Ortelius made a point of showing that this legendary locale was an actual place in the physical world. In the distance can be seen the cities of Antioch and Seleucia with the river Orontes winding into the distance and emptying into the Mediterranean Sea.

Ortelius's depiction, drawn primarily from classical historical and literary sources such as Ammianus, Strabo and Philostratus, is remarkable in being one of the engravings entirely his own work. While Ortelius was notable for his assiduous presentation of the best available contemporary geographical sources, he relied on his own composition when it came to the maps and views pertaining to ancient history, biblical history and classical myth.

This engraving was first printed in 1595 to be included both in Ortelius' Parergon and in his Theatrum Orbis Terrarum. This example appeared in the final, 1624 edition of the Theatrum published by Balthazar Moretus. Ortelius' atlas is well represented in institutional collections.

Ortelius, A., Theatrum Orbis Terrarum, (Antwerp) 1624.     Abraham Ortelius' magnum opus, Theatrum Orbis Terrarum, was the world's first regularly produced atlas, which 'set the standards for later atlases . . . It was the first undertaking of its kind to reduce the best available maps to an uniform format.' (Koeman) A modestly-sized work of fifty-three maps in its first edition of May 1570, it was an immediate success: there were three further editions that year, and the work remained in print for a total of 32 editions, the last of which was 1641, well after its author's 1598 death. Ortelius added to his atlas constantly, and by 1595 the Theatrum contained 147 maps. Ortelius is renowned generally as an editor, and indeed much of the Theatrum is compiled from a variety of sources: in such cases, Ortelius was scrupulous in naming his sources. But Ortelius was also a mapmaker in his own right: many of his maps are a distillation of various sources into his own work, and there were many maps - particularly in his atlas of Biblical and ancient history Parergon - which were entirely Ortelius' work. In his role as an editor, Ortelius followed in the footsteps of Munster, whose Cosmographia was, until Ortelius, the best window on the world for the curious European reader. In terms of the artistry of his maps, Ortelius oversaw the first great flourishing of copperplate engraving in the service of cartography to occur in Northern Europe. Ortelius' work provided the model for the atlases of Mercator, Hondius, Blaeu and all their progeny in the 17th century - many of whom were to produce faithful editions of Ortelius' maps in their own productions.