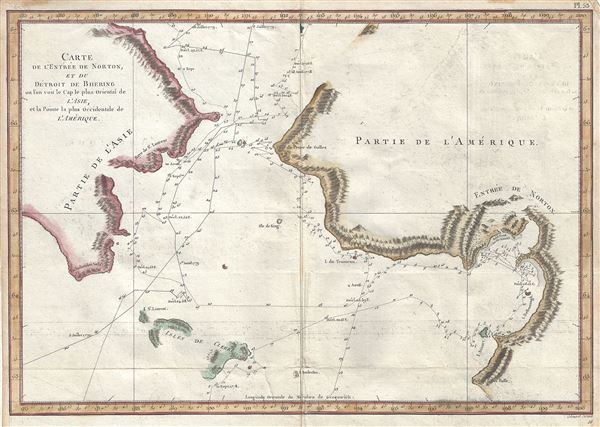 This is a scarce and important 1785 map of the Pacific Northwest, Alaska and the Bering Strait depicting the two expeditions of Captain Cook. It covers the Bering Strait from the Chukchi Sea north of Cape Prince of Wales south to St. Lawrence Island (Isle de Clerke) inclusive of Norton Sound and the Seward Peninsula of Alaska and the eastern tip of Russia. Capes, islands and bays are identified with relief beautifully rendered. The routes taken by Cook and the HMS Resolution between 1778 and 1779 is noted in some detail with soundings throughout

Cook was the first to accurately chart the Alaskan coastline and provide a detailed mapping of the Aleutian Islands. After his discovery of the Hawaiian Islands, Cook sailed north in search of the Northwest Passage, only to be blocked by Arctic Ice. From the Oxford Dictionary of National Biography:

The north-west coast of North America was sighted on 7 March and for the next six and a half months Cook carried out a running survey of some 4000 miles of its coast from Cape Blanco on the coast of Oregon to Icy Cape on the north coast of Alaska, where he was forced to turn back by an impenetrable wall of ice. A search for a route back to Europe north of Siberia also proved fruitless. During this cruise Cook became the first European to enter Nootka Sound on the north-west coast of Vancouver Island, where he remained for a month taking astronomical observations and cutting spars for use as spare masts and yardarms.

Cook returned to Hawaii, where he was killed in 1779, and the expedition continued under the command of Captain Clerke, who made a final attempt to pass through the Bering Strait. This map was engraved by Robert Bernard and was issued in the French edition of the Official Account of Cook's Third Voyage.

Very good. Some offsetting and foxing. Original platemark visible. Some wear along original fold lines.
Looking for a high-resolution scan of this?