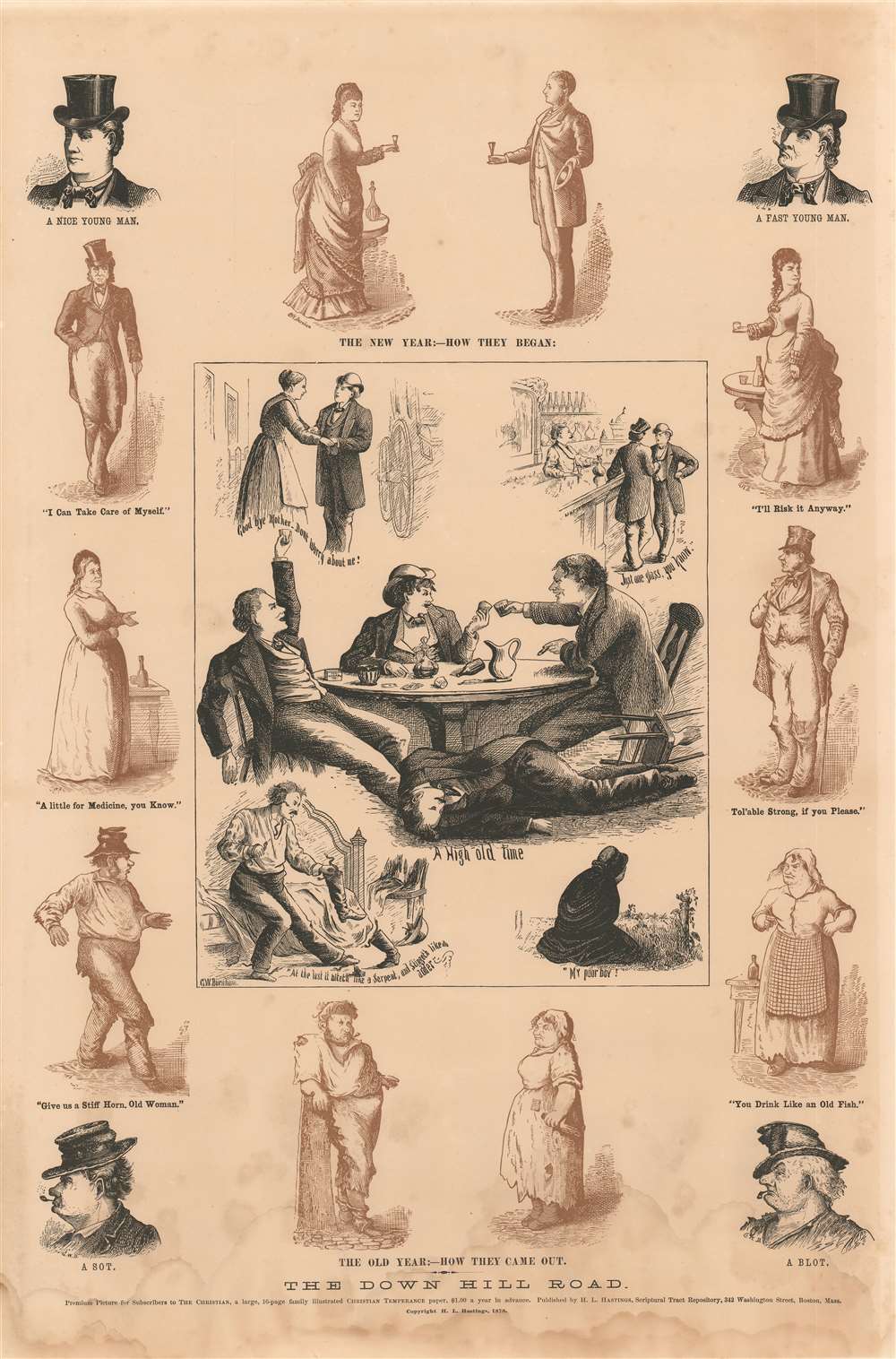 This is a rare 1878 Temperance (anti-alcohol) broadsheet, published by a Horace L. Hastings, a prolific Boston tract publisher and hymn composer. The captioned photoengraved vignettes that make up the broadside tell three discrete tales, all testifying to the destructive effect of alcohol consumption. The four corners of the sheet are dedicated to portraits of one man over the course of a drinking life. ‘A NICE YOUNG MAN’ in the upper left becomes ‘A FAST YOUNG MAN’ in the upper right, his hair grown longer and less neat, a cigarette appearing in his sneering mouth, his gaze indirect. He then transforms into ‘A SOT’ as depicted in the lower left, having developed a bulbous nose, a pipe habit, and an inability to care for hats. The lower right corner shows our hero’s final stage, ‘A BLOT,’ whose carelessness extends to the rest of his wardrobe. Presumably he can no longer afford tobacco, for his pipe is unlit and upside down.

The artist uses color to differentiate his story lines. The story told here is of a couple over the course of a marriage, with alcohol. The pair start out confidently ‘I can take care of myself - I’ll risk it anyway’ and end in recriminations ‘You drink like an old fish.’ As with the young man of the first tale, the couple begin well turned-out and end up fat, slatternly and grumpy.

The centrally-placed morality tale in the broadsheet begins with a likely lad leaving home ‘Good bye mother - don’t worry about me!’ A glass of spirits with a friend at a bar leads to a blackout debauch, delirious visions of snakes, and finally Dear Old Mother mourning her boy at an unmarked grave. (One does not go to temperance broadsides to experience subtlety.)

Hastings’ broadsheet was produced as a premium for annual subscribers to his’ ‘The Christian,’ Hastings’ illustrated temperance newspaper. It is rare, both on the market and in institutional collections. OCLC shows only two physical examples, at the Boston Atheneum and the American Antiquarian Society Library.

Horace Lorenzo Hastings (November 23 1831 - October 21, 1899) was an American preacher, hymn writer and publisher. Publishing as the Scriptural Tract Repository, Hastings produced an array of moral and religious tracts for over fifty years. His 'The Inspiration of the Bible, or, Will the Old Book Stand?' Was printed in nearly three million copies and translated into eighteen languages. His oeuvre includes more than a hundred hymns.


George W. Burnham (1831-1888?) was an American artist in Massachusetts in the second part of the 19th century. His surviving, identified work consists of photoengraved illustrations for temperance and revival meeting broadsheets.