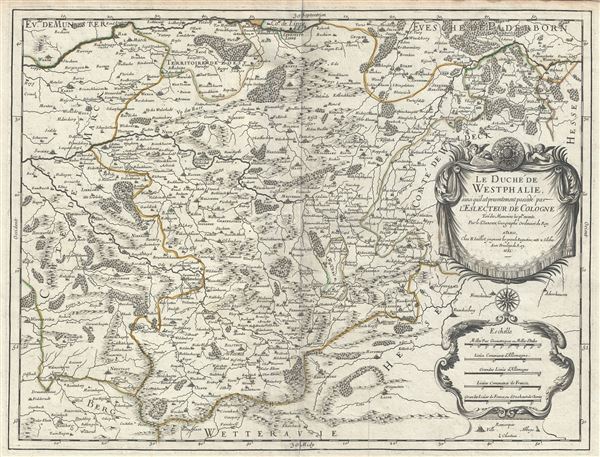 This is a fine 1681 map of Westphalia, Germany by Alexis-Hubert Jaillot. It covers the Westphalia region in northwest Germany from Hamm south to Ferndorf and from Wipperfurth east as far as Menne. The map renders the entire region in extraordinary detail offering both topographical and political information with forest and mountains beautifully rendered in profile.

Westphalia was part of one of the 'imperial circles' created by the Holy Roman Empire in the 1500s. Groupings of regional territories were designed for defensive, tax, and administrative purposes within the empire. Westphalia, in 1648, became famous when the 'Peace of Westphalia' was signed in Munster and Osnabruck, ending the Thirty Years' War.

A beautifully engraved title cartouche adorns the lower left quadrant of this map, along with a compass rose, scale and legend. This map was created by Alexis-Hubert Jaillot and Guillaume Sanson in 1681.