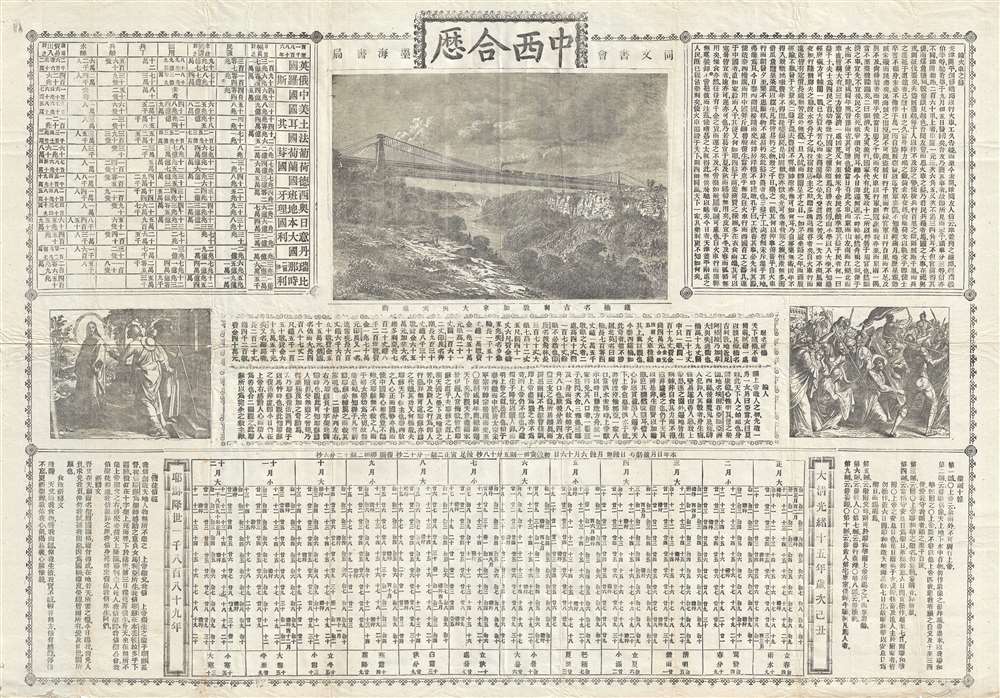 A rare 1889 (Guangxu 15) Chinese Catholic missionary broadside printed by Tongwen Shu, the first Chinese owned lithographic press in Shanghai. The broadside compares eastern and western culture and attempts to link the wonders of western technology, such as trains and suspension bridges, with Christianity.

At center, Dieudonné Lancelot's woodcut engraving of Roebling's Niagara Falls Suspension Bridge immediately draws the eye – which while then considered a wonder would ironically be deconstructed less than 10 years later. This view, taken from an unknown photo, was engraved for the Parisian periodical Le Tour du Monde. The other two images are Biblical scenes from the Crucifixion and Resurrection of Christ. The imagery sets the stage for the broadside's textual elements, all of which are in Chinese, which conflate western technological advancement with the Catholic faith.

The broadsheet's textual content is focused on a comparative calendar appearing at bottom center. This calendar features western months on top and compares them with the Chinese season-based solar calendar, at bottom. To either side, Chinese text dates the map using both the western system (left) and the Chinese imperial era system (right). To the left and right of the calendar, Chinese text list's the Ten Commandments (right) and the Catholic catechism (Apostles Creed).

The upper right text block describes the Tianjin Railway. Construction of the railway began in 1886 and completed in 1888, one year before this broadsheet was issued. At the time Tianjin station was the first strain in China. The Kaiping Tramway and Imperial Railways of North China were thus extended to Tianjin and renamed the Jintang Railway (津唐铁路).

This broadsheet was printed in Shanghai by Tongwen Shu (同文书局), the first Chinese owned and operated modern printing concern in China. The printing was completed on behalf of the London Missionary Society Press (墨海書館), an English missionary press that by this time has ceased to print on its own behalf, but contracted other local printers to produce promotional material.

This broadsheet is rare and we have been able to identify no other known examples.

Tongwen Shu (1882 – 1899), or 同文书局, or the Combined Learning Publishing House, was the first Chinese owned and operated Lithographic book publisher in China, credited for China’s lithographic ‘golden age’ (1876 - 1905). Established in Gunagxu 8 or 1882, the firm was founded by the wealthy merchant Xu Run (徐润, 1838 – 1911) and Xu Hongfu (徐鸿复) printed books and broadsheets in lithograph. Xu Run was impressed with British publishers active in Shanghai and wanted to duplicate their printing success. He purchased 12 large rotary lithograph presses and established an office in Shanghai that employed nearly 500 workers. Their publications included printed of Chinese classical texts, western texts, missionary materials, broadsides, and official documents. Their offices were destroyed by fire in 1893, leading to the loss of much of their equipment. Xu Run, who also established the first insurance service in Shanghai, had the business well insured and they consequently quickly recovered. It continued to print until 1898 or 1899. Learn More...


London Missionary Society Press (1842 – 1889), known in Chinese as 墨海書館, was a British-Chinese missionary publishing house active in Qing Shanghai during the second half of the 19th century. The press was founded by missionaries Walter Henry Medhurst (1796 – 1857), William Muirhead and William Lockhart (1811 – 1896) in 1842. Shortly afterwards they were joined by Joseph Edkins, and William Charles Milne. The firm is considered to be the earliest modern printing establishment in Shanghai and the first to introduce western-style Chinese-language printing. It is said their first presses were giant iron contraptions run by a belt that traveled through a hole in the wall where it was driving by concealed oxen walking in circles. The Society Press focused on publishing western religious and moral works in Chinese, as well as Chinese-English crossover works. The organization ceased printing on its own account in 1873, but continued to publish work by contracting other local printers until about 1890. Learn More...

Very good. A few minor verso reinforceents along original fold lines. Edges exhbit some wear.
Looking for a high-resolution scan of this?