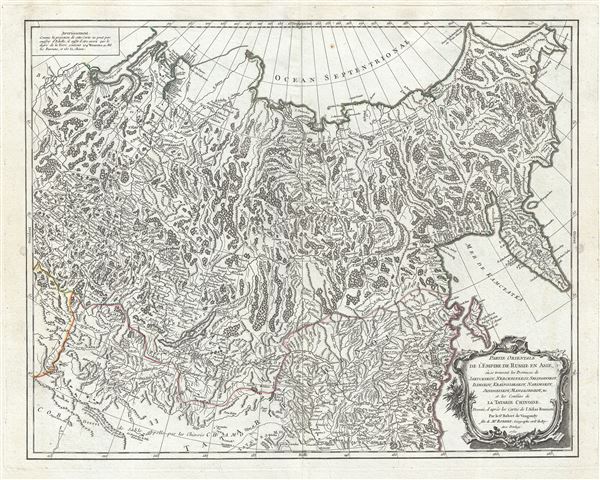 Identifies the conquests of Genghis Khan.
$400.00

This is a beautiful example of Robert de Vaugondy's map of the Russian Empire or Eastern Russia. It map extends from the Kara Sea and the Province of Narimskoy in Siberia east as far as Kamchatka and the Bering Sea and and south as far as the Gobi Desert and Tartary. If offers excellent detail throughout showing mountains, rivers, forests, national boundaries, regional boundaries and cities.

In the lower left quadrant, the map notes the vast stretch of land known for most of the 18th century as Tartary. This area was once part of the vast Mongol Empire consolidated under Genghis Khan around 1206 AD. Although the empire of the Great Khan had long since disintegrated into constituent states by the time this map was made, this little known and largely inaccessible region held a special fascination for western Europeans who were reared on legends of the dreaded Mongols or Tartars and their leader, the terrifying Scourge of God. Consequently, much of the geography of Central Asia represented here references these early conquests. Genghis Khan's largely abandoned capital at Karacum (Kara Kum) is noted. To the south of Karakum, Vaugondy notes a range of mountains with a notes that roughly translates to 'Mountains believed to be those where the Tombs of the Mongol Emperor Ginghiz Khan's family are.'

A beautifully engraved title cartouche adorns the lower right quadrant of the map. This map was drawn by Robert de Vaugondy in 1750 and published in the 1757 issue of his Atlas Universal. The Atlas Universal was one of the first atlases based upon actual surveys. Therefore, this map is highly accurate (for the period) and has most contemporary town names correct.