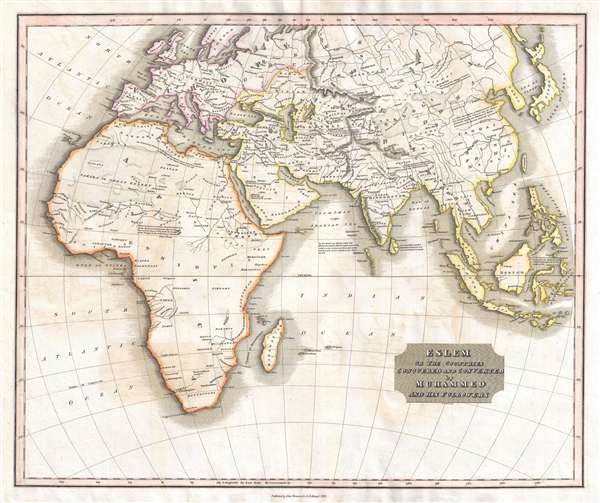 Interesting and unusual historical map showing the extant of Islamic conquests under Mohammed.

A rare 1829 John Thomson historical map illustrating the conquests and conversions of Mohammed and his followers. The map, which is centered on Arabia, covers from the Canary Island to Japan and from Scandinavia to South Africa. Thomson compiled this map from various sources ranging from the journals of Mungo Parke to travelers reports from Central Asia and the Far East. ).

This map engraved by T. Clerk and published by John Thomson for Thomson's 1829 New Classical And Historical Atlas. This atlas, and the maps it contains, is quite rare and OCLC identifies only 3 examples.

Thomson, J. New Classical and Historical Atlas, (Edinburgh) 1829.     The New Classical and Historical Atlas is one of John Thomson's rarer works. The atlas was issued in concert with James Wyld and follows stylistically on Thomson's better known work from the New General Atlas. It was published in 1829 and contained 49 hand colored imperial folio maps. When it was originally issued the atlas cost a whopping 8 guinea. This atlas, though grand, must not have been exceptionally popular as Thomson was driven into bankruptcy one year later in 1830. Sales may have subsequently increased as his finances appear to have marginally recovered only to slump again in a second bankruptcy filing in 1835. Around this time Thomson sold the plates of this Classical Atlas to A. K Johnston. There is some evidence that Johnston considered republishing it from the original Thomson plates in 1835, but no full examples of this work survive.

Very good. Light transferrence. Original centerfold exhibits some wear.
Looking for a high-resolution scan of this?