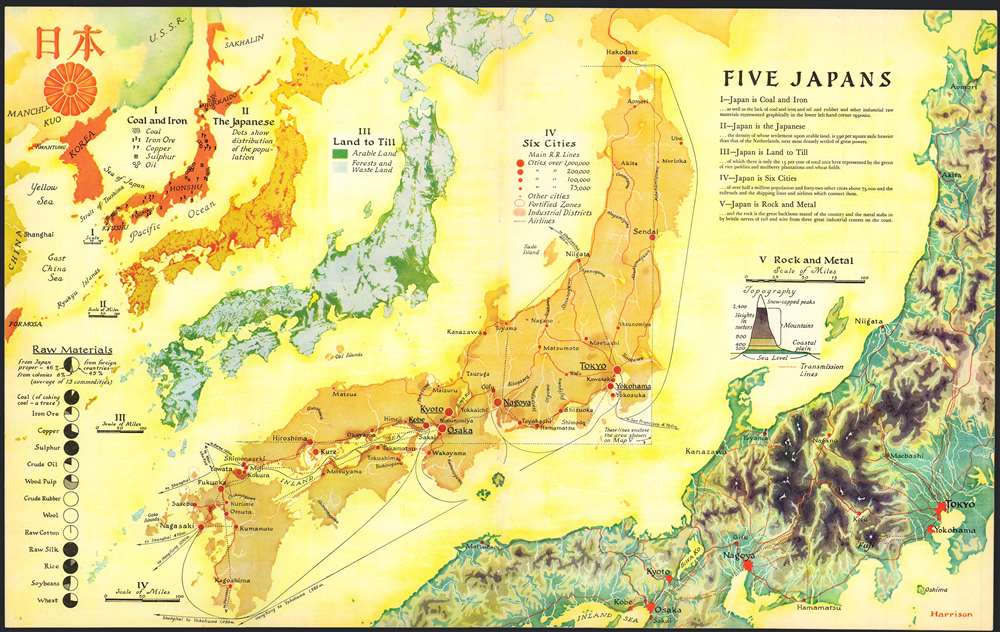 An Early Masterpiece of Harrison's Cartographic Presentation of Data.
$250.00

This 1936 Richard Edes Harrison map of Japan - really, five separate maps of Japan on a single sheet – is one of the graphic artist Harrison's first published forays in cartography, and is a superb representation of his skill at the visual display of quantitative information. Accompanying an article describing Japan's pre-war industrial powerhouse, this combination of maps uses bright color in Harrison's inimitable style to clearly present a layered picture of Japan, her people, and her industries. The five maps fan out across the page in a visually arresting composition.

I: Coal and Iron

In what is physically the smallest of the maps, Harrison uses a key to show the sources of Japan's key industrial resources. The map is supplemented with an array of pie charts showing the balance of what resources Japan produced domestically and those which were imported. Perhaps more importantly, this is the one map on this sheet which a) places Japan physically in a broader geographical context with Korea, China and the U.S.S.R. and b) directly makes reference to Japan's expansionism: the deep orange coloring the Japanese Islands is also applied to Formosa, Kwantung, Korea, and the southern half of Sakhalin Island.

The next map uses red dots on a mustard background to indicate the distribution of Japan's population, 'the density of whose settlement upon arable land is 590 square mile heavier than that of the Netherlands.' Comparing this map to the next shows the high correlation between Japan's population and her cultivable land.

III: Land to Till

Combined with the previous map, this one highlights one of the great pressures on Japan: the density of her population, and the constraint of a relatively small area available for farming.

This map highlights Japan's urban centers, the railways connecting them, and the distances to Shanghai, Hong Kong, Vladivostok, and remote San Francisco.

This map focuses on Honshu, and in particular the mountainous spine of that main Japanese Island. It details the arteries connecting Tokyo, Nagoya, Kyoto and Osaka, as well as the railways and telephone/telegraph lines crossing the mountains to the northern cities. A color-key emphasizes the sharp changes in elevation in Japan's massif, and (again, in comparison with the other maps) shows the concentration of Japan's population in lowlands near the coast, in conjunction with Japan's farmlands.

This map was printed in a single edition for inclusion in the September, 1936 issue of Fortune Magazine and is one of the earliest of Richard Edes Harrison's cartographic contributions to that publication. While collected runs of Fortune can be found in institutional collections, this individual map is not cataloged in OCLC and it has been largely neglected by the trade.

Very good condition. Thread holes as always with this map, but no loss or dogears.