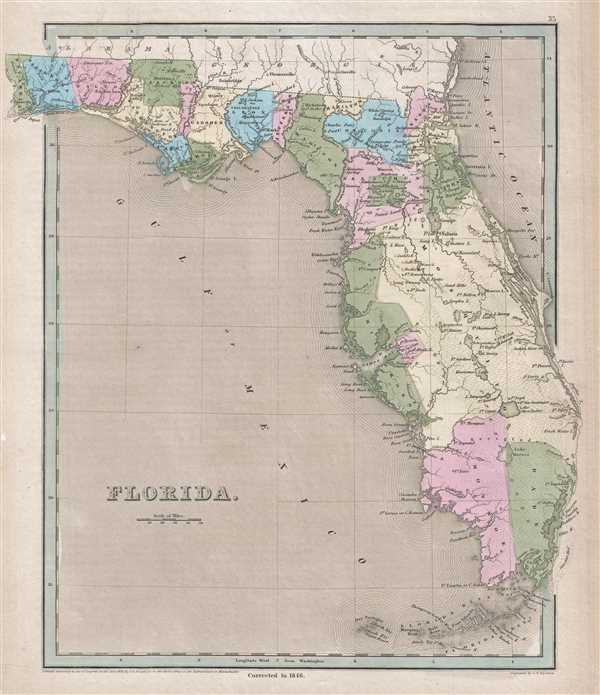 This is an 1846 Thomas Bradford map of Florida. The map depicts the state from Georgia and Alabama to the Florida Keys and from the Perdido River to Jupiter Island and the area that is occupied by Palm Beach today. Florida is divided into counties and colored accordingly, with Mosquito County making up most of Central and South-Central Florida. The most intriguing aspects of this map are two parcels of land that are colored like counties but are, in fact, private land grants.

These two grants, one labeled Arredondo's Grant, and the other Miranda's Grant, are holdovers from Spanish rule in Florida. Beginning in the 1790s, the Spanish crown offered land grants to people courageous enough to emigrate to Florida or for meritorious service to the crown. Arredondo's grant, named after Fernando de la Maza Arredondo, is located to the west of St. Augustine in Alachua county. It was granted to Arredondo in 1817 by Alexander Ramirez of Havana. Miranda's Grant, citing Pedro Miranda, a Spanish sailor, is in the vicinity of modern day Tampa. After Florida became a possession of the United States in 1821, the U.S. government declared that it would honor the land grants, as long as the owner could prove the legitimacy of the grant. Both Pedro Mirandaand Fernando de la Maza Arredondo took their case to the United States Supreme Court, where their rights to the land were affirmed, although it appears that eventually the grants were erased.

Numerous cities, towns, and villages are labeled throughout the map, including Tallahassee, Pensacola, and St. Augustine. Several forts are labeled, including Fort Lauderdale, Fort Jupiter, and Fort Pierce. Lakes, such as Lake Okeechobee and Kissimmee Lake are also illustrated, along with numerous rivers. The Everglades are also labeled.