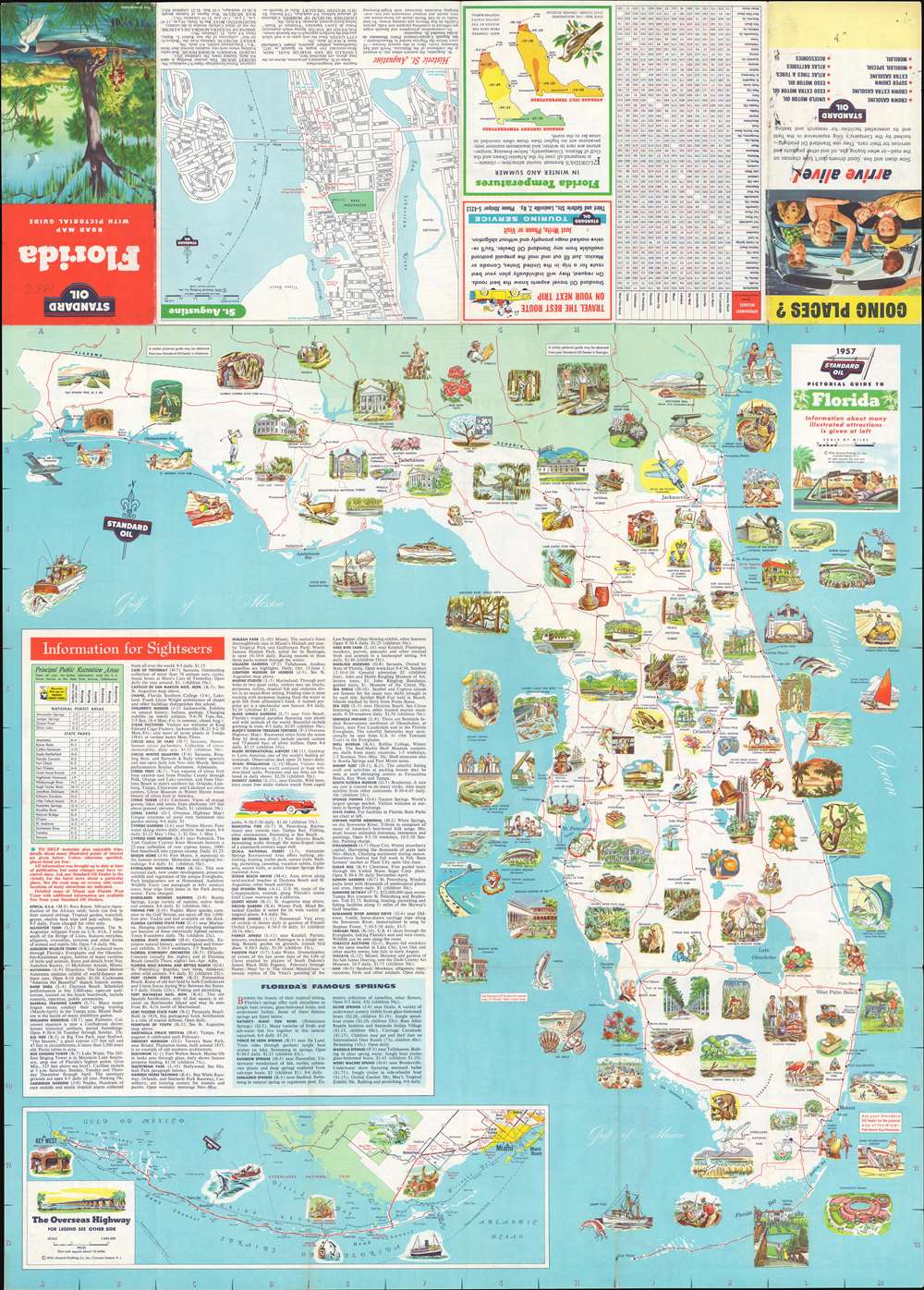 This is a 1956 General Drafting Corporation pictorial map of Florida. Wonderfully colored vignettes promote tourist attractions, such as Silver Springs, the McKee Jungle Gardens, the Ringling Museum of Art, the South Florida Museum, and the Bok Singing Tower. Tourist activities, including deep-sea fishing and waterskiing, are also highlighted. The most-eye-catching (and head-scratching) of these promotes Africa U.S.A., a defunct safari-themed park outside Boca Raton, presenting a young woman with two leashed cheetahs. Other vignettes illustrate Florida's universities, its beaches, and wildlife. Sightseeing information dominates the lower left and includes short summaries of attractions and other activities. An inset focusing on the Overseas Highway from Miami to Key West is situated in the lower-left.

The Road Map on the Verso

A road map of Florida is printed on the verso of this sheet. Inset maps of Tampa and St. Petersburg, Miami, Jacksonville, and Orlando appear along the left and right borders, respectively. Indexes are included along the bottom border.

This map was created and published by the General Drafting Corporation in 1956. Five examples are cataloged in OCLC and are part of the institutional collections at Harvard University, Indiana University, the University of Georgia, the Jacksonville Public Library, and the University of New Mexico.

General Drafting Corporation (1909 - 1992) was one of the 'Big Three' publishers of road maps between 1930 and 1970, along with H. M. Gousha and Rand McNally. Founded in 1909, Otto G. Lindberg, an immigrant from Finland and the company's founder, began his business with a borrowed drafting board and a $500 loan from his father. At the time only twenty-three years old, Lindberg advertised his business as 'any and all general drafting' and was based out of 170 Broadway in New York City. Only two years later, in 1911, the firm secured its first contract from the American Automobile Association to make 'road maps'. Lindberg incorporated his business in 1914 and became its first Chairman of the Board, a position he held until his death in 1968. Lindberg persuaded Standard Oil of New Jersey to let him draw the 'best' road map of the state that they had ever seen, and Standard Oil would distribute it for free. Sufficiently impressed with the finished product, Standard contracted General Drafting to make all their road maps - a relationship that lasted another six decades. This relationship allowed General Drafting to work exclusively for Standard Oil, but when oil companies stopped providing free maps, General Drafting was in a bind. The company tried to expand into the retail map market, and it of course continued creating maps for Exxon (the new name for Standard Oil) to sell, but its returns continued to decline. The firm was purchased in 1992 by Langenscheidt and subsequently absorbed into the American Map Company. General Drafting's state maps became this company's 'Travelvision' lineup. Learn More...