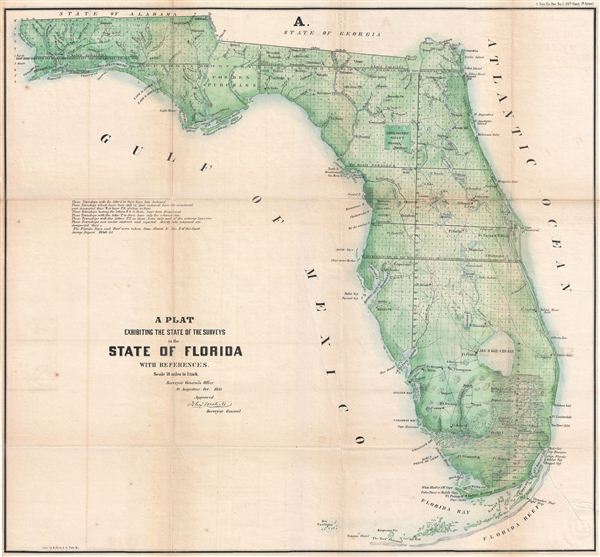 An exceptional example of the 1855 Land Survey Map of Florida. This map represents the state of the Land Survey in Florida as of October 1855. Shows the state divided into several hundred numbered plats, some of which are marked with an 'S' to state that they had been fully surveyed, and some with a 'T' suggesting that they had only been surveyed externally. The map labels several important Seminole War Forts including Fort Bassinger, Fort Center, Fort Thompson, Fort Beynaud, Fort Adams, and others. Notes the everglades, Big Cypress, Fort Lauderdale, Lake Okeechobee, and many of Florida's lakes and river systems.

The map is dated to 1855 and attributed John Wescott, Florida Surveyor General. Wescott took the office of Florida Surveyor General in 1853. He is known to have issued three maps of Florida to accompany his annual reports - this is the third. The second, in 1854, represents a major update and adds an inset of the Florida Keys. The third, the present example, was issued in 1855 and removes the Florida Keys inset. It was printed by the Washington D.C. firm A. Hoen and Company.