1579 Ortelius Map of Florida, Peru, Colombia and the Gulf Coast of Mexico 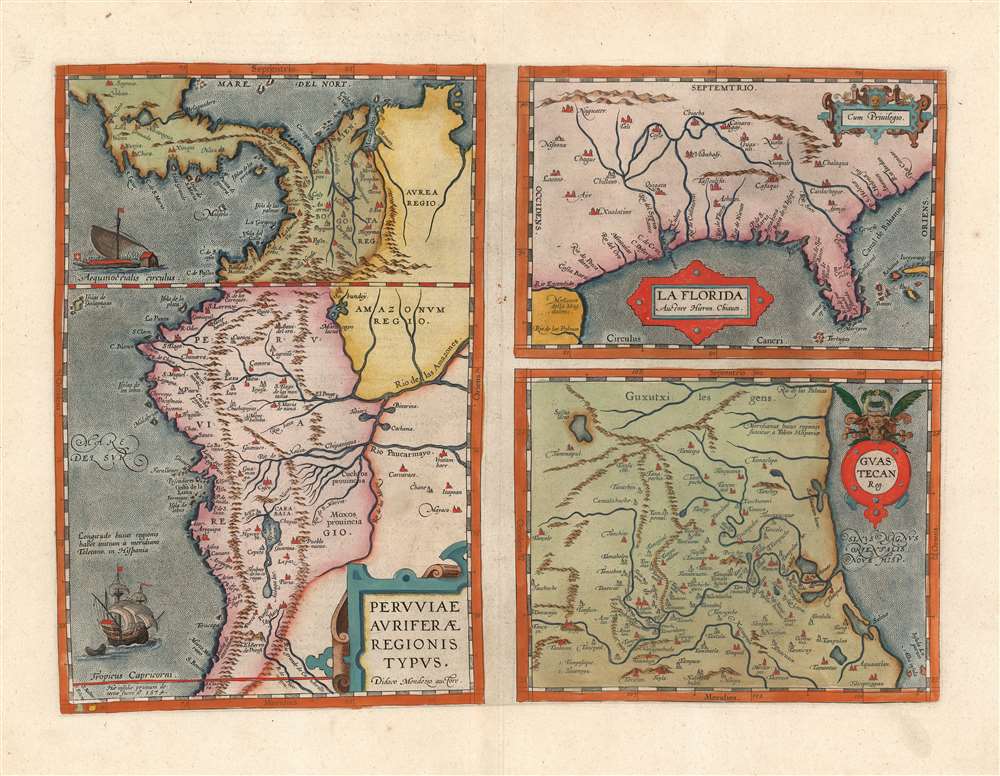 1579 Ortelius Map of Florida, Peru, Colombia and the Gulf Coast of Mexico

This is a beautiful, wide-margined example of Ortelius' 1584 engraving including the first specific map of Florida, the earliest specific map of Peru, and the first map focusing on the Guastecan province of Mexico. The map is a prime example of Ortelius' strength not only as a mapmaker but as a compiler. All these maps combined here are relevant to each other in that they all derive from Spanish sources, and reveal parts of the Spanish Empire in America, despite Spain forbidding the production and dissemination of such maps. That two of these three maps credit specific Spanish sources suggests that perhaps Ortelius enjoyed an open connection with a member of the Spanish bureaucracy. Antwerp was part of the Spanish Empire at the time, but it is certainly testimony of Ortelius's far-reaching network of contacts throughout Europe that he was able to obtain maps such as these for publication.

One of the half-dozen most important mother-maps of southeastern North America. This map probably had more influence than any other map in establishing the subsequent conception of Florida as including that part of the present United States from the peninsula of Florida northward to or beyond the Mississippi.

Its depiction of the region's river systems, and the outline overall, would provide the template for most maps of the American southeast well into the seventeenth century. Ortelius credited this map to Géronimo de Chaves, the Cosmographer Royal to Philip II of Spain, and the chief cartographer of the Casa de Contratacion - the bureaucracy in charge of the administration of Spain's sprawling overseas empire. The map draws on the details of De Soto's 1539-42 expedition. The lack any detail from any of the French or Spanish forays along the Atlantic coastline in the 1560s may be the result of information being suppressed by the Spanish source: the French effort to establish a colony at the St. Johns River in 1564, and the destruction and massacre by Pedro Menéndez de Avilés of that colony would not have been eagerly disseminated by the Spanish.

Revealing the Gold-Producing Regions of Peru

This map, to the 16th century reader, would have commanded more attention by far than the Florida map which attracts most modern collectors. This map - whose title translates to 'map of the gold producing region of Peru' - displays Spain's sources of gold in Colombia and of silver in Bolivia: from Potosi in the south to the essential Spanish port of Cartagena in the north. The map includes two islands in the extreme lower left, even into the border of the map (S. Felicis and S. Nabor) and notes their discovery in 1574. (The presence of this date appears to confuse some catalogers, who list the map with this date.) The map also includes the Galapagos Islands. While these appear on Ortelius' map the western hemisphere, this is the first map to include the islands at this narrow scale. Ortelius attributes the map to Didaco Mendezio, whose precise identity is not known. He is sometimes identified as philologist Diego Hurtado de Mendoza, (1503-1575) despite his never having been to the Americas. While his elder brother, Antonio de Mendoza y Pacheco, had been the Viceroy of New Spain and later Peru, Antonio's death in 1552 makes Hurtado de Mendoza's connection to Peru seem a tenuous one. Both Ortelius and Hurtado de Mendoza, however, appear to have been correspondents with Juan Lopez de Velasco (c. 1530 – 1598) the chief chronicler of the Casa de Contratación, from whom it is possible that the map ultimately came. Peruvian historiography suggests that it is more likely that 'Didaco Mendezio' was one Diego Méndez, chaplain of the Monastery of the Incarnation in Lima, and official cartographer for the viceroy of Peru. Virtually nothing else is known historically of the man, however, and the political and nationalistic desire of Peruvian historians to have ownership of the country's first mapping cannot entirely be ignored.

While all three maps bear elegant cartouche engraving, this map is the most elaborately decorated, featuring a fine sailing ship off the coast near the Tropic of Capricorn, and a galley bristling with soldiers near the Equator.

The Northeastern Reaches of New Spain

The third panel of this engraving is a map of the Guastecan region, whose name is taken from the indigenous Huastec people. The map covers the Gulf coast fromAlba Insula and Insula Luporum (possibly Arrecife Blanquilla and Arrecife Medio) in the south, to the Rio de las Palmas in the north. Thus, the coastline shown is contiguous with that of La Florida, whose coverage of the Gulf coast ends at that river. The Panuco region on the map in particular is depicted accurately, especially the system of lagoons around Tampico. The map - as with the map of Culiacan appearing in 1579 - can be construed as an extension of the map of New Spain introduced to the Theatrumin 1579 - whose author, like the present map, is unknown. The part of Guastecan illustrated here, from about 22 degrees to 25 north and from 104 degrees to 100 longitude, falls in the area of the general New Spain map filled with an elaborate cartouche. The specific connection between the two maps, however, is sufficiently indistinct that it is unlikely they share an author. The inclusion of the Rio de las Palmas on both maps suggests that those two maps share a source and it seems likely that Chiaves produced both the Florida and Guastecan maps.

The map was produced for inclusion in Ortelius' Theatrum Orbis Terrarum, first appearing in 1584 editions of the work. Based on the verso text, this first state example can be identified as having been included in the 1592 Latin edition of Ortelius' atlas. Van den Broecke estimates that approximately 5424 copies of this map in all editions were printed, and it is fair to assume that perhaps ten percent of these have survived in one form or another. The map is well represented in institutional collections, and it appears on the private market with some regularity, but examples of this quality have become difficult to find.


Géronimo de Chaves,(1523-1574) was a Spanish cartographer, best known as the author of the first atlas map of Florida. His father, Alonso de Chaves, was examiner of pilots at the Casa de Contratacion (officially, La Casa y Audiencia de Indias.) This was the Spanish bureaucracy established by the Crown of Castile in 1503 to administer all matters pertaining to Spain's overseas empire. Its domain included the training of navigators and pilots, and the creation of maps and charts. Géronimo would follow his father in service to the Casa but as Chair of Cartography. It is not known how or precisely when his map passed from Spain to reach Ortelius in Antwerp, but since it did not reach print until ten years after Chaves' death it may be that it was allowed out of the country as obsolete. Learn More...

Ortelius, A., Theatrum Orbis Terrarum, (Antwerp: Ortelius) 1592.     Abraham Ortelius' magnum opus, Theatrum Orbis Terrarum, was the world's first regularly produced atlas, which 'set the standards for later atlases . . . It was the first undertaking of its kind to reduce the best available maps to an uniform format.' (Koeman) A modestly-sized work of fifty-three maps in its first edition of May 1570, it was an immediate success: there were three further editions that year, and the work remained in print for a total of 32 editions, the last of which was 1641, well after its author's 1598 death. Ortelius added to his atlas constantly, and by 1595 the Theatrum contained 147 maps. Ortelius is renowned generally as an editor, and indeed much of the Theatrum is compiled from a variety of sources: in such cases, Ortelius was scrupulous in naming his sources. But Ortelius was also a mapmaker in his own right: many of his maps are a distillation of various sources into his own work, and there were many maps - particularly in his atlas of Biblical and ancient history Parergon - which were entirely Ortelius' work. In his role as an editor, Ortelius followed in the footsteps of Munster, whose Cosmographia was, until Ortelius, the best window on the world for the curious European reader. In terms of the artistry of his maps, Ortelius oversaw the first great flourishing of copperplate engraving in the service of cartography to occur in Northern Europe. Ortelius' work provided the model for the atlases of Mercator, Hondius, Blaeu and all their progeny in the 17th century - many of whom were to produce faithful editions of Ortelius' maps in their own productions.