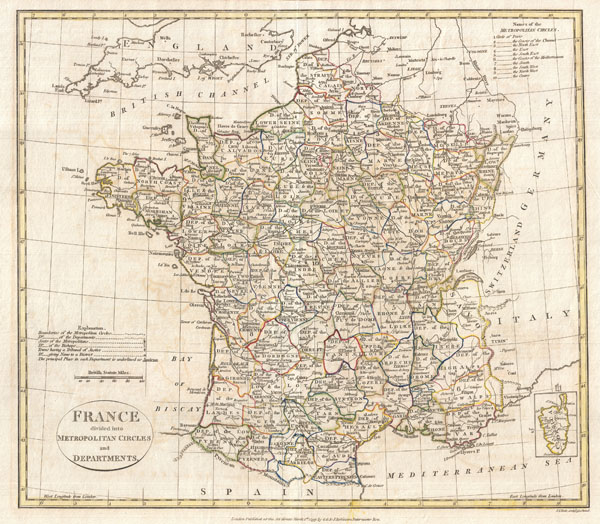 A fine 1799 map of France divided into Metropolitan Circles and Departments by the English map publisher Clement Cruttwell. The French Department system was established on March 4th, 1790 by the National Constituent Assembly to replace the provinces with what the Assembly deemed a more rational structure. They were designed to deliberately break up France's historical regions in an attempt to erase cultural differences and build a more homogeneous nation. Initially there were 83 departments but by 1800 that number increased to rougly 130. Many of the departments that were created in 1790 remain the administrative distircts to this day. Lists the Metropolitan Circles in the upper left quadrant. These include the Circle of Paris, Circle of the North East, the East, South East, Coasts of the Mediterranean, South, South West, North West, and Centre. An legend of symbols appears in the lower left quadrant. Includes rivers, political boundaries, important cities, ports and gulfs. Mountains and other topographical features shown by profile. Outline color and fine copper plate engraving in the minimalist English style prevalent in the late 18th and early 19th centuries. Drawn by Clement Cruttwell and published in the 1799 Atlas to Cruttwell's Gazetteer.