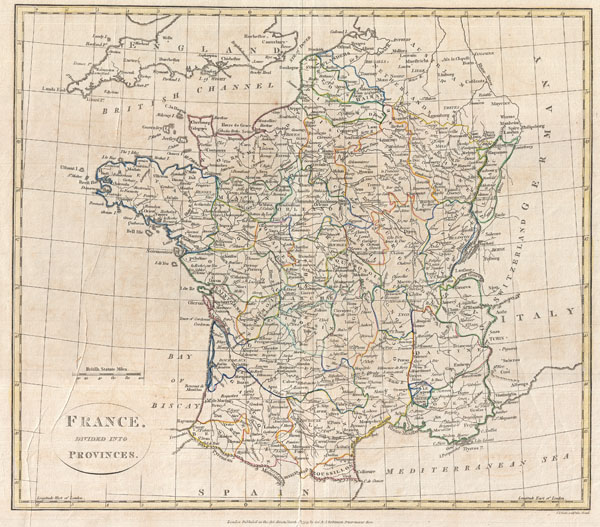 A fine 1799 map of France Divided into Provinces by the English map publisher Clement Cruttwell. France was organized into provinces until March 4, 1790, when the establishment of the department system superseded provinces. The change was an attempt to eradicate local loyalties based on feudal ownership of land and focus all loyalty on the central government in Paris. There were roughly 40 provinces in France before they were abolished. Maps displays all provinces, including the province of Île-de-France, the center of power during most of French history. Many atlas produced during this period thus included two maps of France, one in Provinces, and one in Departments. Includes parts adjacent Austrian Netherlands, Switzerland, Germany, Italy, and Spain. Includes rivers, political boundaries, important cities, ports and gulfs. Mountains and other topographical features shown by profile. Outline color and fine copper plate engraving in the minimalist English style prevalent in the late 18th and early 19th centuries. Drawn by Clement Cruttwell and published in the 1799 Atlas to Cruttwell's Gazetteer.