1750 Vaugondy Map of France in Antiquity 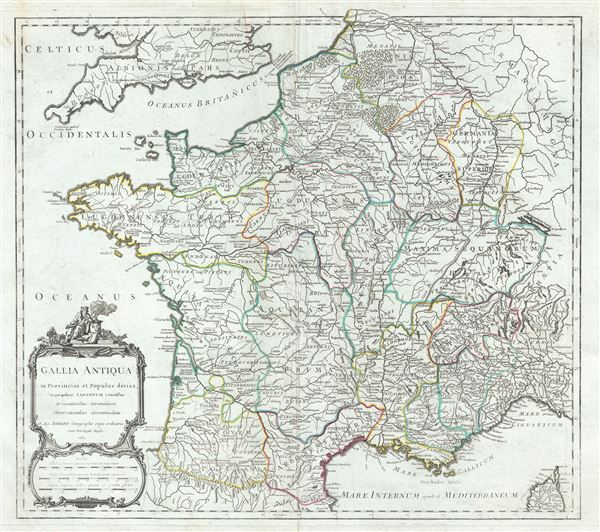 1750 Vaugondy Map of France in Antiquity

This is an attractive 1750 map of France or Gaul or Gallia by Robert de Vaugondy. It covers Gallia during ancient Roman times and extends from the English Channel south as far as the Pyrenees Mountains and Hispania. It includes the modern day nations of France, Luxembourg, Belgium, Switzerland and the Netherlands. It identifies several important cities and towns and uses ancient names throughout. The Roman provinces of Lugdunensis, Narbonensis, Aquitania and Belgica are also noted.

The lower left quadrant depicts a beautifully engraved title cartouche. This map was drawn by Robert de Vaugondy in 1750 and published in the 1757 issue of his Atlas Universal. The Atlas Universal was one of the first atlases based upon actual surveys. Therefore, this map is highly accurate (for the period) and has most contemporary town names correct, though historic names are, in many cases, incorrect or omitted.

Rumsey 3353.006. Pedley, Mary Sponberg Belle et Utile: The Work of the Robert de Vaugondy Family of Mapmakers, 92.
Looking for a high-resolution scan of this?