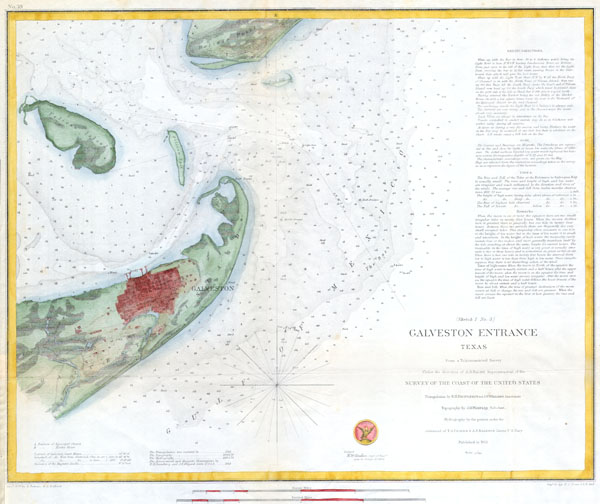 A rare hand colored 1853 costal chart of Galveston harbor, Texas and the finest chart in this series. Includes detailed sailing instructions, depth soundings, and impressive inland detail of the city of Galveston and vicinity. Triangulations were accomplished in 1848 by R.H. Fauntleroy and J.S. Williams, the topography was accomplished in 1849 & 1850 by J.M. Wampler, while the hydrography was under the direction of T.A. Craven and A.S. Baldwin in 1851 and 1852.. Published under the direction of A. D. Bache for the 1853 Report of the Superintendant of the U.S. Coast Survey.

Phillips, Philip Lee, A List of Maps in the Library of Congress, p. 291; Smith, Murphy D. ”Realms of Gold”: A Catalogue of Map in the Library of the American Philosophical Society, 1230.
Looking for a high-resolution scan of this?