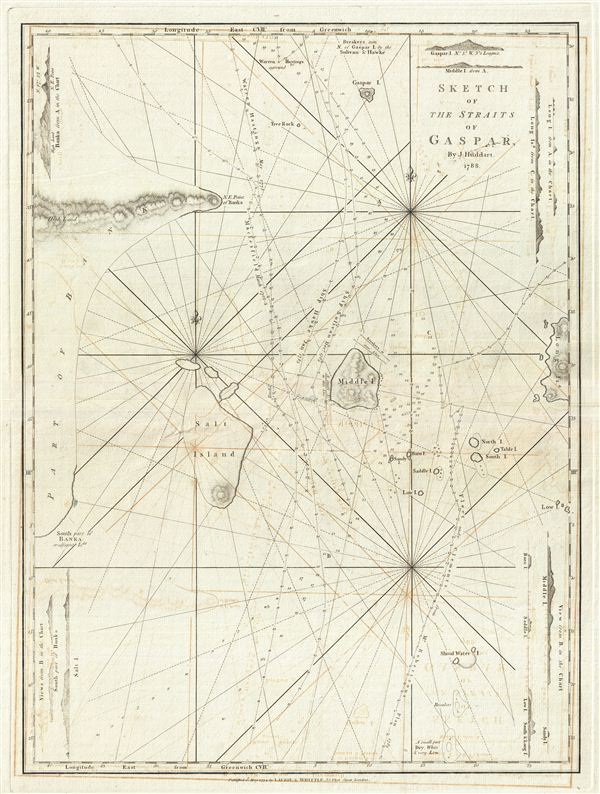 This is a fine example of Laurie and Whittle's 1794 nautical chart or maritime map of the Gaspar Strait, Indonesia. The map covers the strait between Belitung and Bangka Islands connecting the Java Sea to the South China Sea. By the end of the 18th century the Gaspar Straits were one of the major shipping arteries between China and the West. Nonetheless, it was an extremely dangerous passage, called by one British sea captain who shipwrecked there in 1817, 'the most dangerous area between China and London.'

About ten years ago, the Gaspar Strait came into focus with the discovery of an ancient shipwreck at a spot known locally as 'Black Rock,' Divers seeking sea cucumbers discovered the oldest, most important, marine archaeological discovery ever made in South East Asia, an Arab dhow - or ship - built of teak, coconut wood and hibiscus fiber, packed with a treasure that Indiana Jones could only dream of. There were 63,000 pieces of gold, silver and ceramics from the fabled Tang dynasty, which flourished between the 7th and 10th centuries. The artifacts discovered included the largest Tang gold cup ever discovered and some of the finest Yue ware - porcelain that the ancient Chinese likened to snow because of its delicacy. The exceptional quality of the goods has led some scholars to suggest that these were gifts from the Tang Emperor himself. The treasure was subsequently acquired by the government of Singapore where it is displayed in a new Maritime Museum.

Laurie and Whittle prepared this chart for their 1799 issue of the East-India Pilot. Cartographically this chart is derived from an earlier map prepared by Joseph Huddart. The map offers rich detail including countless depth soundings, notes on the sea floor, commentary on reefs, rhumb lines, shoals, place names and a wealth of other practical information for the mariner. This map was registered by Laurie and Whittle from their offices at 53 Fleet Street, London, on May 12, 1794.


Joseph Huddart (1741 - 1816) was a British navigator, sea captain, hydrographer, and businessman active in the late 18th and early 19th centuries. Huddart was born in Allonby, Cumberland, England. His father was a tradesman who became part owner of a local fishery and herring processing company. Showing an early affinity for mathematics and mechanics Huddart trained as a sea captain along the Irish coast. Later he designed and built his own ship, the Patience with which he traded his father herring as far as the West Indies. In 1771 Sir Richard Hotham, a family friend and distant relative introduced Huddart to the East India Company. Huddart completed four voyages to the East Indies where he surveyed the coasts from India to Sumatra. Much of his work found its way into various published nautical charts issued in the late 18th and early 19th centuries. Huddart retired from sailing around 1790. Afterwards he completed a navigational guide to China and New Holland which earned him a place in the Royal Society. Also, while residing in London Huddart devised a technique to improve the tensile strength of marine rope using an automated steam powered process. The processes earned an extraordinary fortune with which he acquired several estates in London and Wales. Huddart died at Highbury Terrance, London in 1816. He was 76 years old and survived by five sons. Learn More...