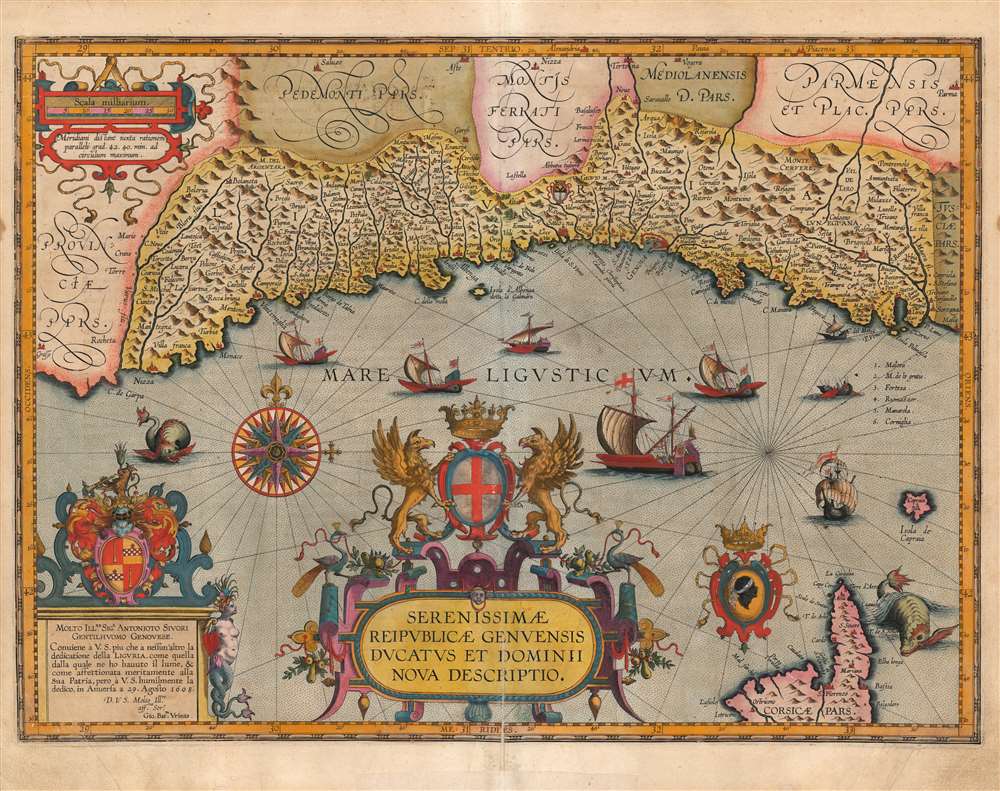 One of the rarest and most beautiful Ortelius maps.

This is a beautiful example of Jan Baptista Vrients' map of the Republic of Genoa, added to Ortelius' Theatrum Orbis Terrarum in 1608. It is among the scarcest of the maps appearing in the Ortelius opus, having appeared in only the four final editions of the work. Typical of the maps thus included by Vrients, it is a tour de force of decorative cartography and stands among the most sumptuously engraved of the maps to appear in Ortelius' opus. Also, Ortelius atlases printed by Vrients enjoyed hand coloring of a very high quality, and the present map exemplifies this: the coloration on the cartouches, compass roses and ships is particularly rich.

Ortelius is well known as a compiler - most of the maps in his Theatrum were carefully sourced from the best sources available to him, and cited. Vrients provides a long list of authors for readers desiring 'a broad description of the cities, lands, places, enterprises and wars of the Genoese' but Vrients' direct source for the present map is not provided. According to Peter Meurer, the map is a compilation of Giovanni Antonio Magini's 1597 maps of east and west Liguria. These would be his extremely rare, separately issued first edition maps 'Liguria Overo Riviera di Genova Occidentale' and 'Liguria overo Riviera di Genova di Levante.' Vrients did not copy them wholesale. The coastline presented is significantly less concave than is indicated (accurately) on Magini's maps. Vrients appears to have wished the map to be more visually consistent with Ortelius' map of the Piedmont, which conformed to the authoritative Gastaldi maps of the mid-16th century. The specific details along the Ortelius/Gastaldi coastline such as bays, rivers and promontories have been replaced with detail from Magini's 1597 works.

Dedicated to a Scion of Spain's Financial Powerhouse

The map reflects a period of great financial and political power for the Republic of Genoa. Over the course of the 16th century, many aristocratic Genoese families amassed tremendous fortunes via banking and trade, including chattel slavery, much of which was connected to the exploration and exploitation of the New World. The Spanish Empire, in particular, relied on Genoese financiers in the second half of the 16th century and the first quarter of the 17th. Genoese merchant nobility consequently became patrons of the arts - an example of this might be the dedicatee of the present map, 'Sigr. Antonioto Sivori,' (a 'Genoese Gentleman' whose name appears to have survived nowhere in the historical record but in this dedication.)

Sivori's dedication, indeed, is superb, a plinth surmounted with the family arms, and surrounded with strapwork and vividly colored leaves. The dedicatory plinth features a mermaid crowned with clams and crab legs. The center is dominated with a bold title cartouche, surmounted with the Genoese arms and two gryphons.

In addition to the Ligurian coast, the northern part of the island of Corsica is included in the lower right. It is accompanied with the 'Moor's head' of the Corsican arms.

The sea is engraved with a stippled pattern, rhumb lines and a superb compass rose. The Ligurian sea is sailed by six grand Genoese galleys, and two other sailing ships. Two sea monsters prowl the coasts of Nizza and Corsica.

This map was engraved in 1608, either by or on behalf of Jan Baptista Vrients for inclusion in Ortelius' Theatrum, which Vrients continued to publish as Ortelius' executor. Thus, it only appeared in the final four editions of the Ortelius atlas, and is consequently one of the scarcest of the maps appearing in that work. Van den Broecke estimates only 925 to have been printed. Ten separate examples are cataloged in OCLC. This specific example corresponds typographically with the 1608 Italian edition of the Theatrum.

Johannes Baptista Vrients (1552-1612) was a Flemish engraver, publisher and mapseller. Little is known of his early years, but it is to be assumed he came up as an apprentice among the mapmakers of Antwerp, where the guild named him a master in 1575. In the 1590s he executed world maps for Plancius and Linschoten. (In 1600 he became executor for Ortelius, and acquired the plates for the Theatrum after that mapmaker's death. He would go on to publish further editions of the Ortelius atlas between 1606 and 1612. Vrients also acquired the plates for De Jode's Speculum in and around 1600, but he did not republish that work - though he would preserve the De Jode plates depicting the Electors of the Holy Roman Empire, reprinting it in his editions of the Ortelius atlas after 1603. Vrients' editions of the Theatrum were not published in Antwerp (that city having fallen during the Dutch war with Spain) but in Amsterdam. Learn More...

Very good. Old mend to lower centerfold with no loss, but some separation. Few marginal mends away from printed image. Superb original color.