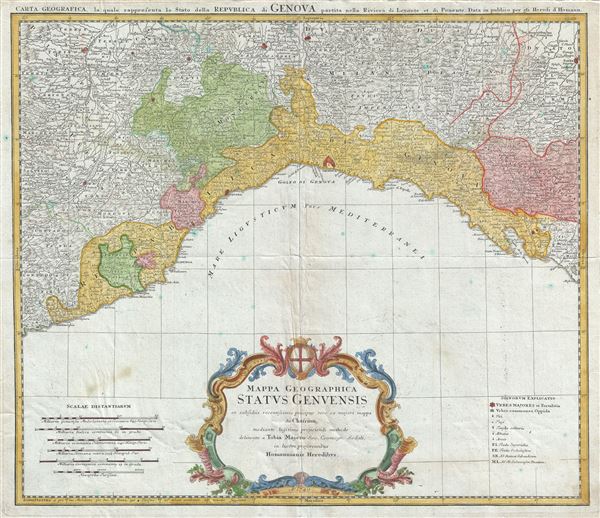 This is a beautifully detailed 1749 Homann Heirs map of the Republic of Genoa (modern day Liguria), Italy. It covers the north-western part of Italy from Monaco to Massa. The map is exceptionally detailed, noting towns, rivers, lakes, cities and a host of additional topographical features.

During this time in history, to prevent the division of the republic, Genoa participated in the War of the Austrian Succession against the Kingdom of Sardinia and in 1745 declared war on Piedmont-Sardinia. It would be occupied by the Austrian forces in 1746. Corsica announced independence from the Republic in Genoa and in 1768, with the Treaty of Versailles, Genoa's claims to Corsica would be sold to the French.

A key is included in the lower right quadrant of the map while a beautiful title cartouche adorns the lower half the map. This map was issued by Homann Heirs in 1749.