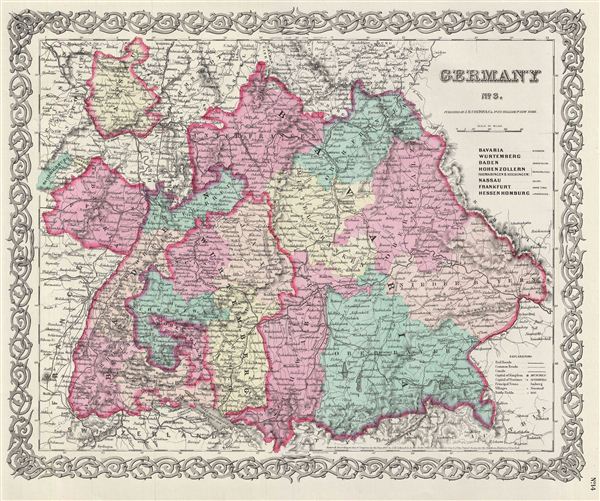 A beautiful 1855 first edition example of Colton's map of southern Germany. Like most of Colton's europe maps, this map was derived from an earlier wall map of the World produced by Colton and D. Griffing Johnson. Covers the 19th century German provinces of Bavaria, Wurttemberg, Baden and Pfalz, as well as numerous smaller regions. Divided and color coded according to regional divisions.

In 1848 the March Revolution swept through europe, in particular Germany. These Revolutions were nationalist pro-German, pan-German, declarations of discontent with the archaic autocratic political structure that dated to the 39 original German states established under the Holy Roman empire. The Napoleonic Wars dissolved the Holy Roman empire in 1806, briefly making Bavaria an independent kingdom and doubling its size, until, in 1871, most of the former Confederation states were consolidated into the newly proclaimed German empire. The years following the violent suppression of the March Revolution saw a vast middle class exodus from the German states to the United States, leading to 'Germantown USA,' and popular interest among Americans in the Fatherland.