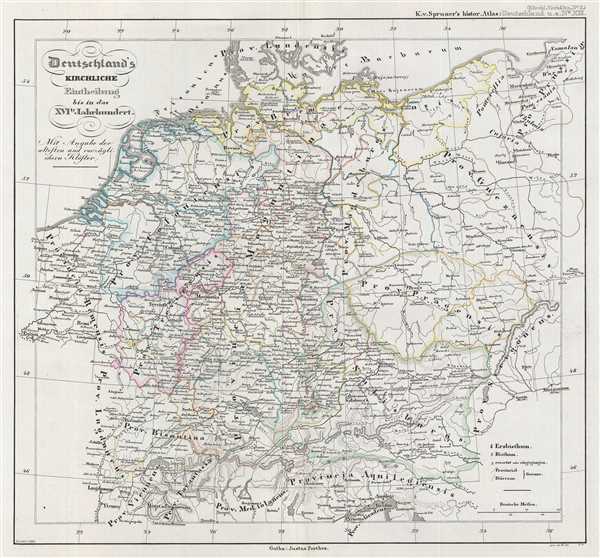 This is Karl von Spruner's 1854 map of Germany's illustrating the region's ecclesiastical divisions in the 16th century. The map covers Germany from the Baltic Sea to Provincia Aquileiensis. During the High Middle Ages after 1517, Martin Luther, a German priest, led the Protestant Reformation against the Catholic Church. The northern states became protestant while the southern states remained Catholic, and would clash in the Thirty Year's War from 1618 to 1648, marking the end of the Holy Roman empire and dividing Germany into various autonomous states. The whole is rendered in finely engraved detail exhibiting throughout the fine craftsmanship of the Perthes firm. Prepared by Karl Spruner for publication as plate D XIII in the second edition of Justus Perthes' 1854 Historich-Geographischer, Hand-Atlas zur Geschichte der Staaten europa's vom Anfang des Mittelalters bis auf die Neueste Zeit.