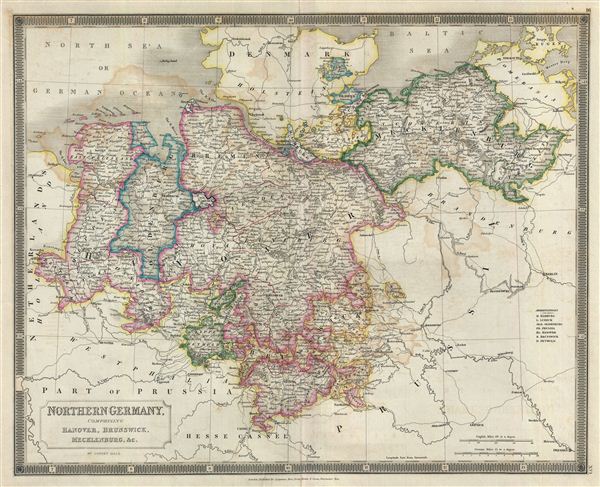 This is a beautiful map of northern Germany from Sidney Hall's extremely scarce 1835 New General Atlas. It covers north Germany from Oldenburg south as far as Cassel and from Bentheim to Strasburg, depicting the semi-autonomous kingdoms, duchies, and Prussian territories in southern Germany. These include Hanover, Brunswick and Mecklenburg. Towns, rivers, mountains, railroads, and various other important topographical details are noted. Elevation throughout is rendered by hachure and political and territorial boundaries are outlined in color. A list of abbreviations is included near the right border of the map.

The Congress of Vienna in 1815 created The German Confederation to coordinate the economies of these separate but culturally related German-speaking countries. The former Electorate of Brunswick-Luneburg was elevated to King of Hanover. The Confederation acted as a buffer zone between Austria and Prussia, the two largest and most powerful member states. It briefly dissolved during the Revolution of 1848, but was re-established in 1850. Nonetheless the rivalry between the two powerful states increased until it finally broke out into the Austro-Prussian War. Prussia won the Austro-Prussian War in 1866 which ultimately led to the collapse of the German Confederation. Hanover was conquered by Prussia as a result of this war. A few years later, in 1871, most of the former Confederation states were folded into the newly proclaimed German Empire.