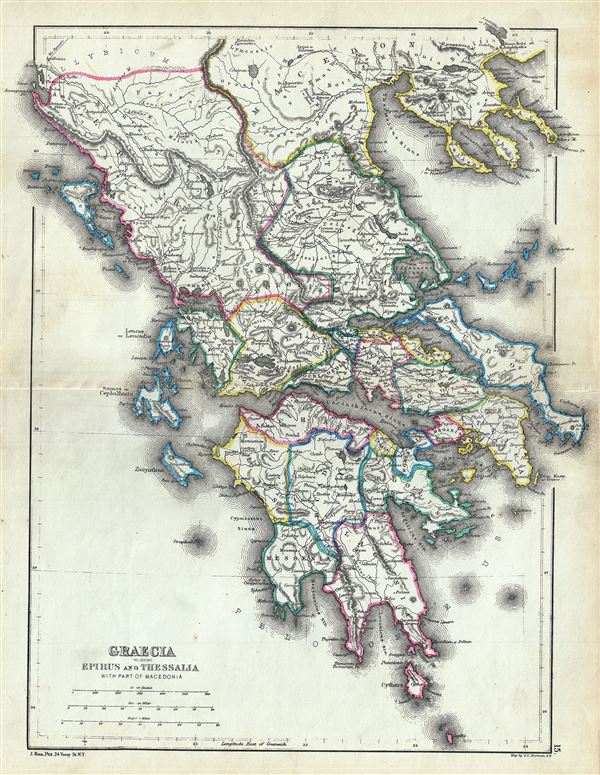 This is a fine 1867 map of ancient Greece by William Hughes. The map focuses on Greece in antiquity, covering from Cythera to Thessaloniea in Macedonia. Ancient Epirus and Thessalia are also included. The map notes several towns and cities and uses both contemporary and ancient names - an invaluable resource for scholars of antiquity.

Following the Battle of Corinth in 146 BC, the Greek peninsula came under Roman rule. The period from 31 BC and AD 180 in Greek history is described as the era of the Pax Romana. This was a period of peace and security when many Greek cities flourished, leading to cultural and economic progress. After the fall of the Western Roman Empire, Greece became the center of the Eastern Roman or Byzantium Empire. However, following the conquest of the capital city of Constantinople, the Byzantium Empire fell to the Turks in BC 1453. Greece would be under Ottoman rule for nearly 1,000 years until the Greek War of Independence in 1821.

This map was created by William Hughes, printed by J. Bien and engraved by G.E. Sherman, for issued as plate 15 in Sheldon and Company's An Atlas of Classical Geography.