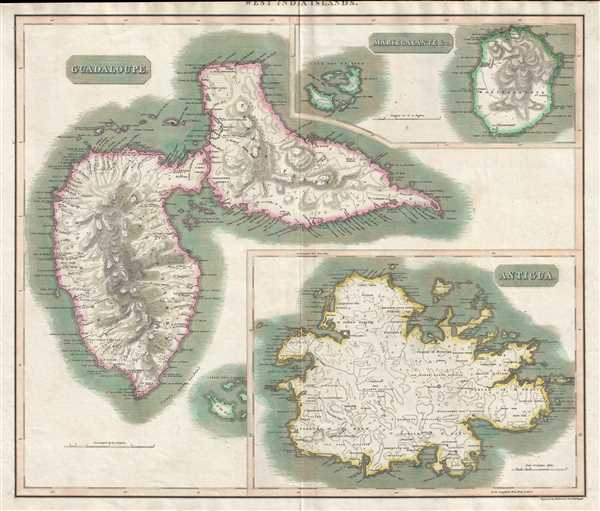 This is an 1815 John Thomson map of Guadeloupe, Antigua, and Marie-Galante in the West Indies. Each island is depicted as an inset, with each inset focusing on one island. All three islands are illustrated in detail, with numerous coastal locations, towns, villages, and other physical features labeled on each of them. The topography of the islands is also depicted, with Sainte Anne and La Soufriere labeled on Guadeloupe.

This map was engraved by Kirkwood and Son of Endiburgh and published by John Thomson in the 1815 edition of Thomson's A New General Atlas.


Robert Kirkwood (December 8, 1774 – November 14, 1818) was a Scottish engraver active in Edinburgh during the late 18th and early 19th century. He is the scion of the important Scottish Kirkwood family, who produced a number of great engravers. His father was James Kirkwood, another well-known Edinburgh engraver, and probably the man who trained him in the engraver's art. Initially he patterned with his father and they published under the imprint of 'Kirkwood and Son,' but after about 1814 to his death, he published under his own name. Around 1803 Kirkwood invented and patented a modification to the standard printing press that increased printing speeds. He died at his home, 3 Arniston Place, in Edinburgh. He was survived by his son, also Robert Kirkwood (1798 – 1843) who continued the family engraving enterprise. Learn More...