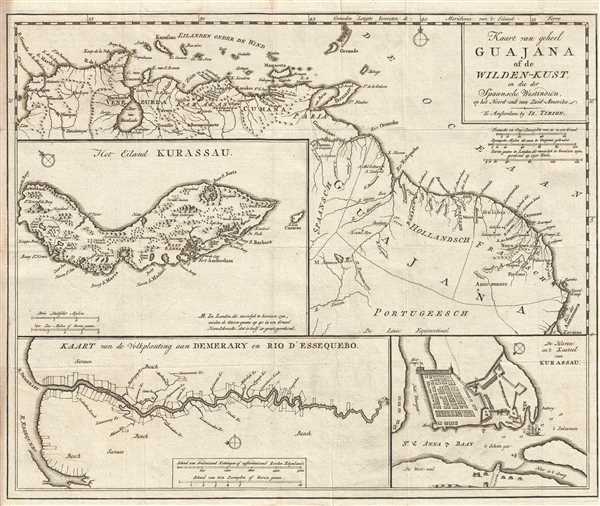 Includes three inset maps - Curacao, the main castle on Curacao, and the course of the Essequibo River.

This is a c. 1767 Isaak Tirion map of northern South America. The map depicts the region from the Caribbean islands of Aruba, Curaçao, and Grenada to the mouth of the Amazon River and from Cartagena (Karthagena), Colombia to the mouth of the Amazon, including the modern-day countries of Colombia, Venezuela, Guyana, Suriname, French Guiana, and Brazil. Here, Guyana, Suriname, and French Guiana are labeled as Spanish, Dutch, and French Guajana. Highly detailed, numerous locations along the coastline are labeled, with myriad labeled and unlabeled streams and rivers running into the Caribbean and the Atlantic other than the Amazon, including the Orinoco (Oronoko) and Essequibo (Essequebo) Rivers. Some of the topography is illustrated by what appear to be mountain ranges. The Lage de Maracaibo in Venezuela is illustrated, labeled here as Meer van Marakaibo. Several cities and towns along the coast are labeled, including Cartagena, Colombia; Maracaibo (Marakaibo) and Caracas (Karakas), Venezuela; Paramaribo, Suriname; and Cayenne, French Guiana.

Three inset maps are included on this map. The first, and highest from the top, depicts the island of Curaçao, which is located off the coast of Venezuela. Both topography (hills and two large rock formations) and vegetation (stands of trees all across the island) are illustrated. Numerous bays and harbors are labeled along the island's coastline, with a handful of settlements indicated by small houses. Next, the inset map in the lower right corner depicts the harbor and castle of Curaçao along St. Anna Bay. This smaller, yet very appealing, map illustrates the city's defenses, in the form of its castle, battery (which faces the narrows), and a pair of forts. Several anchorages are indicated by small anchors and depth soundings are included in the narrows. The last of the three inset maps illustrates the course of the Essequibo River, the largest river in Guyana. Its source lies in the Acarai Mountains (which are illustrated here, but are unlabeled) and flows into the Atlantic. Several locations along the river are labeled, particularly the river's tributaries. The mouth of the Demerara (Demerary) River is located in the same general area as that of the Essequibo.

This map was created by Isaak Tirion and posthumously published c. 1767.