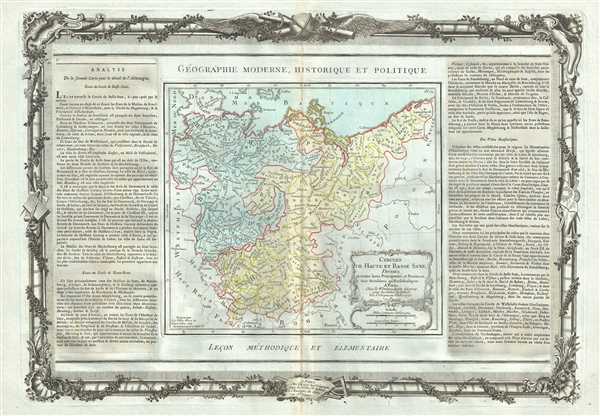 This is an attractive 1786 map of Upper Saxony and Lower Saxony, what is now central Germany, by the French Cartographer Louis Brion de la Tour. The map covers from Holstein south to Bohemia and Westphalia east to Poland. Renders the entire region in extraordinary detail offering both topographical and political information.

The 'circles' of Germany are the 'imperial circles,' administrative units created for tax and defense purposes by the Holy Roman Empire, of which these areas were a part. The Napoleonic Wars would, of course, dissolve the Holy Roman Empire and lead to the consolidation of Germany in 1871. During the French Revolutionary Wars, the Hanoverian Duke and British King George III allied with the Prussians against Napoleon, which nonetheless did not prevent the French ruler from briefly invading and occupying the territory.