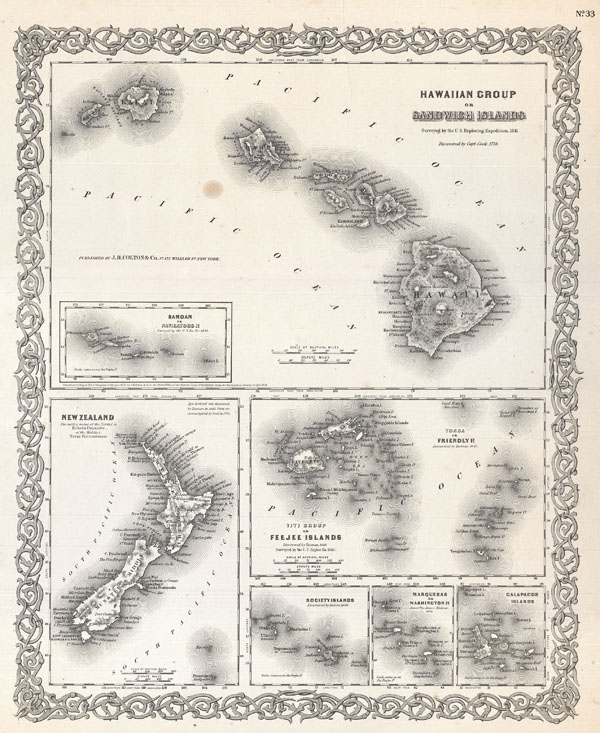 A beautiful 1855 first edition example of Colton's map of Hawaii and other Polynesian island groups. Sheet contains seven separate maps. The top map, occupying the upper half of the sheet, details the Hawaiian Islands or Sandwich Islands, as they were also known. This particular mapping of Hawaii dates to the 1841 U.S. Exploring Expedition to the Pacific. A second map inset in the lower left corner of the Hawaii map details the Samoan Islands. While Colton most likely grouped these together as a matter of space saving practicality, we find it ironic that both territories would eventually become part of the United States. The lower half of this sheet features a large map of New Zealand, Fiji (Feejee) and Tonga (Friendly Islands). Three further inset maps occupy the lower right hand corner, the Society Islands (Tahiti), the Marquesas (of Typee fame), and the Galapagos Islands (made famous by Darwin's discoveries). In each map, Colton identifies various cities, towns, forts, rivers, rapids, fords, and an assortment of additional topographical details. Surrounded by Colton's typical spiral motif border. Dated and copyrighted to J. H. Colton, 1855. Published from Colton's 172 William Street Office in New York City. Issued as page no. 33 in volume 2 of the first edition of George Washington Colton's 1855 Atlas of the World.