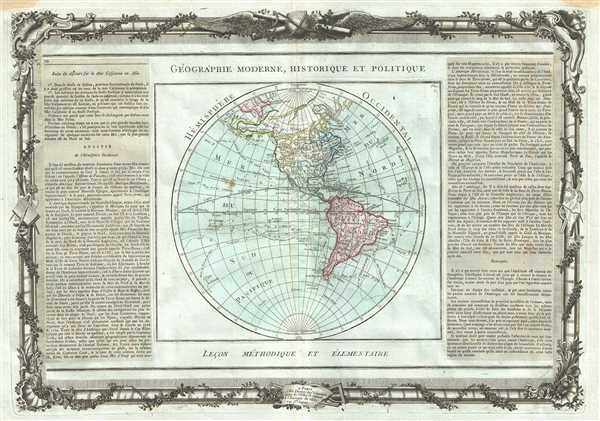 Exceptional map of the western hemisphere depicting the two competing theories in the mapping of the Pacific Northwest.

This is a exceptional map of the Western Hemisphere by de la Tour and Desnos dating to 1786. Covers the entire hemisphere in beautiful detail covering North America and South America. The routes of many explorers and important recent discoveries are noted. This is one of the few maps to depict the two competing theories of the Pacific Northwest region at the time.

A magnificent inland sea, called the Sea of the West or in this case the Mer de L'Ouest, was a body of water, alternatively called the Sea of the West or Baye de l'Ouest. The Sea was a speculated by Philippe Buache and De l'Isle in the early 18th century based upon wishful thinking, American Indian stories, and the somewhat questionable 16th century explorations of Juan de Fuca.

To the left and right of the map are paste downs of French text with remarks and description of the map. Surrounding the whole is an elaborate decorative border featuring floral arrangements, surveying tools, elaborate baroque scalloping, and a winged globe. This map was issued as plate no. 10 in the most deluxe edition of Desnos’ 1786 Atlas General Methodique et Elementaire, Pour l’Etude de la Geographie et de l’Histoire Moderne.