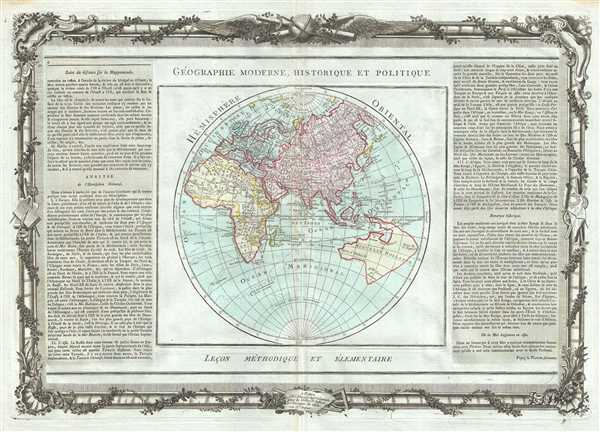 Beautiful map of the eastern hemisphere with Australia joined with New Guinea.
$600.00

This is an impressive map of the Eastern Hemisphere by Desnos and Brion de la Tour dating to 1786. Depicts the Eastern Hemisphere in beautiful detail covering Asia, Europe, Africa and Australia. Though rife with speculation, the map attempts to present a grand overview of the known world based upon the best reconnaissance available at the time. The routes of many explorers and important recent discoveries are noted.

The northeast parts of Asia, which had recently been explored by Vitus Bering and Tschirikow, are depicted with a fair approximation of accuracy. Terre de Gama and Terre de la Company, speculative mis-mappings of the Japanese Kuril Islands by the 17th century Dutch explorers Maerten de Vries and Cornelis Jansz Coen, appear just northeast of Yedso (Hokkaido). Gama or Compagnie remained on maps for about 50 years following Bering's voyages until the explorations of Cook confirmed the Bering findings.

South of the equator the shores of Australia or New Holland are speculatively mapped with a dotted line defining the southern and eastern portions continent. Van Diemen's Land or Tasmania is attached to the mainland, which itself includes New Guinea and parts of the New Hebrides, identified here as Terre de S. Espirit. Terre du St. Espirit, in fact the New Hebrides was mis-mapped by the near insane 17th century Portuguese navigator Pedro Fernandes de Queiros who proclaimed that he had discovered the Great Southern Continent, or Terre Australis. Not to be confused with modern day Australia, Terre Australis was a vast speculative continent that supposedly covered much of the southern hemisphere in Aristotelian symmetry with the bulk of Asia in the Northern Hemisphere. Although by this time most cartographers had stopped mapping Terre Australis, some, perhaps with the great myth in mind, wishfully increased Australia's dimensions.

To the left and right of the map are paste downs of French text with remarks and description of the map. Surrounding the whole is an elaborate decorative border featuring floral arrangements, surveying tools, elaborate baroque scalloping, and a winged globe. This map was issued as plate no. 9 in the most deluxe edition of Desnos’ 1786 Atlas General Methodique et Elementaire, Pour l’Etude de la Geographie et de l’Histoire Moderne.