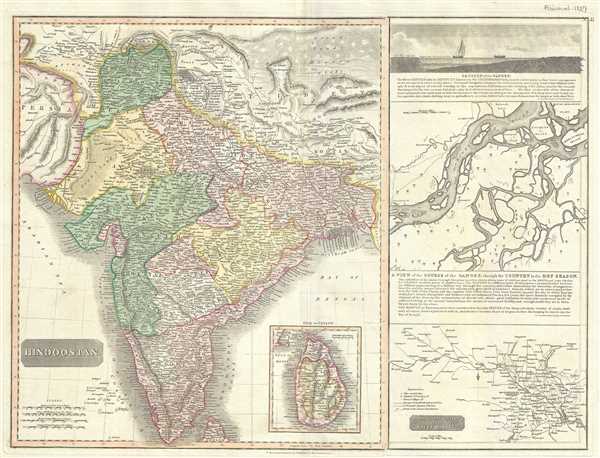 One of the rare maps of India to feature maps of the Ganges River.

This is the 1817 map of India with inset maps of the Ganges River by Edinburgh cartographer John Thomson. This magnificent map is the rarest of the Thomson India series. It depicts the whole of India from Lahore to the idle of Ceylon (Shi Lanka). Numerous cities, towns, rivers, mountains and beautifully depicted deserts are noted throughout. The right hand side of the map is dedicated to a careful mapping of the Ganges River and includes a cross-section of the Ganges, a map of the course of the Ganges in the dry season, and a map of the Inland Navigations routes along the river from the Bay of Bengal to Allahabad. This map's magnificent size, beautiful color, and high detail make this one of the finest maps of this region to appear in the early 19th century. Prepared by John Thomson for inclusion in the 1817 edition of Thomson's New General Atlas.