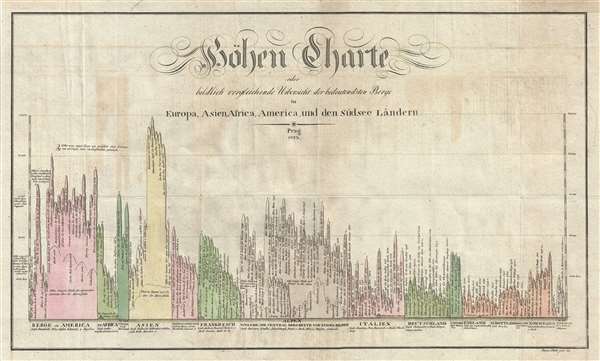 This is an unusual 1823 comparative mountains chart prepared by the Czech engraver Franz Pluth. The chart juxtaposes in close proximity the mountains of Europe, Asia, Africa, America, and Australia. This unusual style of comparative chart, wherein the mountains resemble inverted icicles, was current in Germany in the early part of the 18th century. It is derived from a chart issued by Karl Ferdinand Weiland in Weimar, Germany, c. 1820. The style itself is based upon that of French scientist M. Pasumont, who published a similar comparative chart in the September 1783 journal de Physique. While not as visually arresting as the more pictorial comparative charts then appearing in France and England, it had technical advantages, including allowing the chart maker to incorporate more mountains in an easy to understand graph-like format. The highest mountain here identified is Dhaulagiri, incorrectly assessed at 24,831 feet (actual height 26,795). The height of nearby Everest had not then been ascertained.