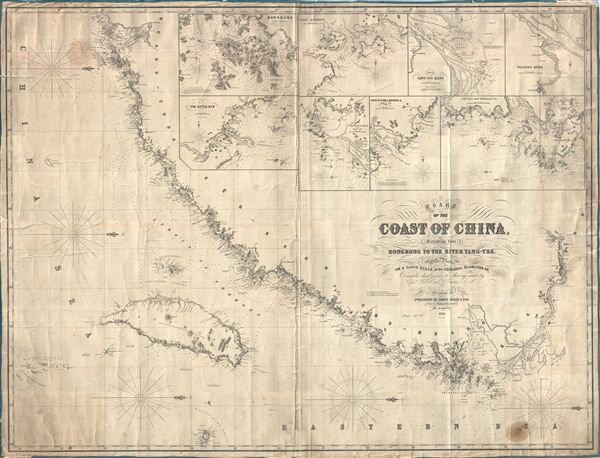 An impressive large 1855 format nautical chart or maritime map detailing the coast of China from the Yangtze River to Hong Kong and Macao. Map incudes Taiwan or Formosa in full. Drawn by the nautical chart maker James Imray, this is one of the rarest 19th century maps of Hong Kong and Taiwan. It includes insets of Hong Kong, the River Min, Amoy Harbor (Xiamen), Tongsang harbor, Hoo-e-Two and Chimmo Bays, the mouth of the Yangtze, and the Chusan Archipelago (Zhoushan). Dated 1855.

Average condition. Backed on original linen. Some damage here and there including rips to linen and map and creasing. Would be well served if professionally cleaned and flattened with fresh linen.
Looking for a high-resolution scan of this?