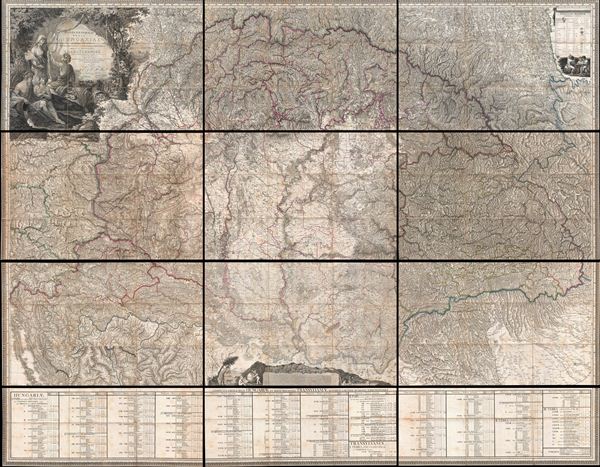 The greatest map of Hungary every made.

Possibly the finest engraved map of Hungary ever produced, and certainly the most detailed, this is Janos's Lipszky's seminal 1806 wall map of Hungary. The map covers Hungary at the height of its territorial claims in the early 19th century, covering from Vienna (Austria) to Bucharest (Romania), and from Belgrade to Silesia. The map includes Transylvania, modern day Croatia and Slovenia, as well as significant portions of Bosnia and Herzegovina, Serbia, Romania, Slovakia, and Ukraine. The detail throughout is almost inconceivable. Towns, cities, rivers, mountains, swamps, forests, political boundaries, and great estates are all noted. Some of the text is so mall one stands in awe at the engraver's mastery.

The English agriculturalist John Paget (1808 - 1892) traveling in Hungary in 1835 found Lipszky's map so accurate that he was able to 'direct those who considered themselves well acquainted with the country' This of course, was exactly what Lipszky had in mind. Note the eight distance scales in at the bottom center of the map, revealing mileage in each of the systems common in Europe at the time. The multiplicity of scales suggests that Lipszky imagined this map being used by travelers from all over Europe, travelers like Paget. The map thus attempts to bring Hungary, something of a European hinterland at the time, into the context of the Austro-Hungarian Empire and a greater Europe.

This map was drawn by Janos Lipszky (here Joannes de Lipszky), and engraved by G. and F. Prixner Karacs. It was published in Vienna. This map is exceptionally rare and scarcely appears outside of institutional collections.

Janos Lipszky (April 10, 1766 - May 2, 1826), also known as Joannes de Lipszky or Jan Lipszky, was a Hungarian Hussar Officer active in the late 18th and early 19th centuries. Lipszky was born in Trencin Szedlicsnan County (now part of Trencianske Stankovce), Hungary. He studied in several well respected schools including the Trencin Piarist School and the Lutheran Gymnasium of Bratislava. He joined the military as a volunteer cadet shortly after graduating. During his military career Lipszky participated valorously in various campaigns associated with the Napoleonic Wars. In the early 19th century, Lipszky was assigned to a military commission under Colonel Neu to produce a highly accurate map of Hungary. Backed by both imperial and Hungarian authorities, Lipszky had unprecedented access to the most recent measurement, astronomical observations, and other data from the Festetich Family Archive. His great map, published in 1806, is the largest and most detailed engraved map of Hungary ever produced, and remains an essential resource for researchers of Hungarian history. Lipskzy died from a fever on the family estate at Szedlicsnan in 1826. Learn More...

Very good. As all known examples, this example is dissected into 9 map panels and 3 smaller statistical panels, all of which are in turn sectionalized into smaller panels and mounted on linen. The whole comprises 12 sectionalized panels which can be folded for storage into original accompanying slipcase. Map can be presented as a whole, with or without the statistical sections, or displayed in panels. Some panels exhibit uneven toning. All edges and margins are clean and present - the scan may have cut of some margins in the above image, but all are present in the actual map. One of the small sub-sections in the lower left quadrant was pasted down on the linen upside down - we attribute this error to the original date of publication and have not corrected it, though to have a restorer lift off the offending piece and turn it around would be a very minor job that can be completed upon request.

Csaba, R. T., The Giants of Hungarian Cartography. Paget, J. H, Hungary and Transylvania; with remarks on their condition, social, political, and economical, p. 103. Bracewell, W. and Drace-Francis, A., Under Eastern Eyes: A comparative History of East European Travel Writing on Europe, p. 215.
Looking for a high-resolution scan of this?