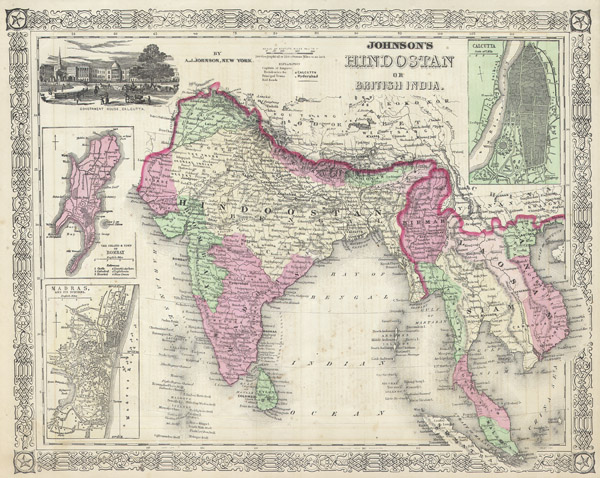 A very nice example of A. J. Johnson's 1864 map of India and Southeast Asia. Covers from the Indus River eastward to include all of India, Burma, Siam (Thailand), Laos, Cambodia, Malaysia (Malacca) and Vietnam (Tonquin and Chochin). Also includes parts of Pakistan, Nepal, China, Bhutan, Sumatra and Ceylon (Sri Lanka). Offers color coding according to country and region as well as notations regarding roadways, cities, towns, and river systems. Three inset maps focus on the Island of Bombay (Mumbai), Madras, and Calcutta. An view of the Government House and Treasury in Calcutta adorns the upper left corner. Features the fretwork style border common to Johnson's atlas work from 1864 to 1869. Published by A. J. Johnson and Ward as plate number 95 in the 1864 edition of Johnson's New Illustrated Family Atlas. This is the last edition of the Johnson Atlas to bear the 'Johnson and Ward' imprint, subsequent editions were attributed to Johnson exclusively.

Johnson, A. J., Johnson's New Illustrated Family Atlas of The World with Physical Geography, and with Descriptions Geographical, Statistical, and Historic including The Latest Federal Census, A Geographical Index, and a Chronological History of the Civil War in America, 1864.