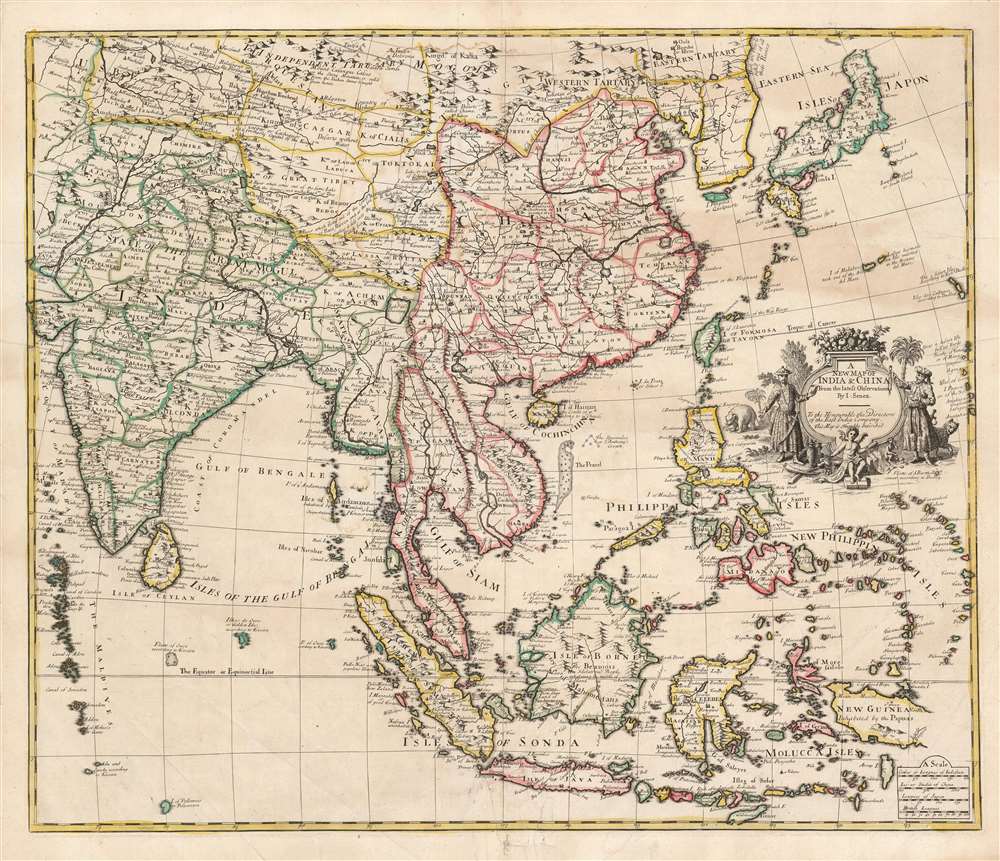 This is a scarce and elegant 1721 English map of Southeast Asia, the Far East, and the East Indies, drawn and engraved by John Senex. The map is dedicated to the British East Indian Company (EIC) and embraces its primary theaters of operation. At the time the EIC was the wealthiest company in the world and a dominant force in all British affairs, this making this map a subject of great interest to the British public.

Following the convention of the prior century, the map encompasses all of what would have been termed 'The Indies': spanning from the mouth of the Indus River and the Maldives Islands in the west, to the Mariana Islands, and an expanse of islands east of the Philippines (the 'New Phillipin Isles') in the general location of, but bearing little resemblance to, the Caroline Islands. The map thus embraces the Spice Islands, the Malay Peninsula, China, Japan, and Korea. Afghanistan and much of Central Asia also appear.

Senex's map represents the passage, to an English audience, of the state-of-the-art geographical knowledge of Guillaume De l'Isle, the preeminent mapmaker of Paris (and consequently of all Europe). Senex further includes islands mapped by the 17th-century maps of English geographer Robert Dudley and notes these additions prominently in order to give an English mapmaker pride of place. Although Senex refers in several places to the Portuguese geographer Texeira, the chief source for the map - De l'Isle - is nowhere credited.

The map's title cartouche, in the tradition of the decorative maps of the 17th century, sets the tone with an assortment of images representing the sort of people to be found in the mapped area, and the treasures available to those bold enough to travel there. A putto rests in the foreground amongst maps, silks, elephant tusks, and China vases. A monkey sits eating fruit, oblivious to a prowling leopard. In the background, an elephant towers. Flanking the fruit-bedecked cartouche are a Chinese warrior and a Mogul - in poses presenting all to the reader.

The map is dedicated to the 'Directors of the East India Company' (EIC) - a natural entity for Senex to so flatter. The EIC was founded in 1600 with a Royal Charter granting a monopoly over the lucrative trade with all lands east of the Cape of Good Hope and west of the Straights of Magellan. The Company was overseen by a governor and 24 Directors, referenced here in the dedication.

The EIC established and maintained trading bases across Asia, establishing its own colonies and taking over those of its rivals. Under Charles II, they began minting currency, received the right to govern territories autonomously, levy armies, make war, and exercise civil and criminal jurisdiction - making them a state-level actor. By the time this map was published, the EIC had overpowered or merged with all competition and was the largest and wealthiest company in the world.

This map was engraved by John Senex for inclusion in his New General Atlas, printed in London by the publisher Daniel Browne in 1721, with editions appearing as late as 1740. Despite being an atlas issue, this map is scarce with only eight examples cataloged separately in OCLC. Uncommon on the market.


Sir Robert Dudley (August 7, 1573 - September 6, 1649) was an English explorer and cartographer, the publisher of the Dell’Arcano de Mare, one of the greatest nautical atlases of all time. He was the illegitimate son of Robert Dudley, 1st Earl of Leicester (a favorite of Queen Elizabeth I) and Douglas Sheffield, the widow of John Sheffield, 2nd Baron Sheffield. In 1594, Dudley led an expedition across the Atlantic, with the intent of harassing Spanish merchantmen. His expedition met with a series of misfortunes, but successfully returned to England the following year. In 1596, Dudley joined an expedition led by Robert Devereux, 2nd Earl of Essex, against Cadiz. He served as the commander of the Nonpareil, and was knighted for his conduct in the capture of Cadiz. In 1603, Dudley made an attempt to establish his legitimacy at court and gain several inheritances, after being (possibly erroneously) informed that his parents had been secretly married. No concrete proof of the marriage could be furnished, thus the judgement was handed down against him in May 1605. Dudley left England in July of the same year, with his lover and cousin Elizabeth Southwell, who was disguised as his page. They married in Lyon in 1606 having received a papal dispensation. The couple settled in Florence, where Dudley began using his father’s title, Earl of Leicester, and his uncle’s, Earl of Warwick. In Florence, Dudley designed and built warships for the arsenal at Livorno and became a naval advisor to Ferdinand I, Grand Duke of Tuscany. In 1607, James I revoked Dudley’s travel license once ordered that he return to provide for his deserted wife and family. Dudley refused, was subsequently labeled an outlaw, and his estate was confiscated. By far Dudley’s most important work was the Dell’Arcano del Mare (Secrets of the Sea). His most celebrated achievement, is the atlas of sea charts of the world which accompanied the work. This maritime atlas was the first nautical atlas of the entire world in print, the first made by an Englishman, the first to show prevailing winds and currents, and the first to use the Mercator projection throughout. Learn More...

Good. Surface mends at bottom centerfold, assorted creases and some areas of staining. Else very good with original outline color.