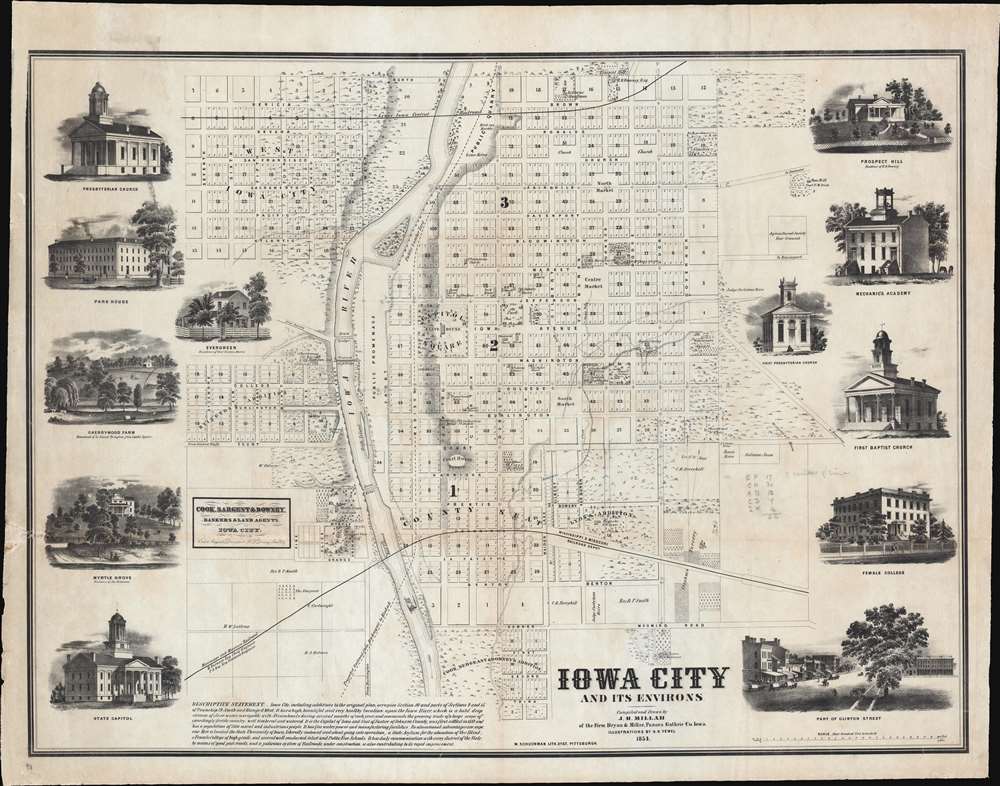 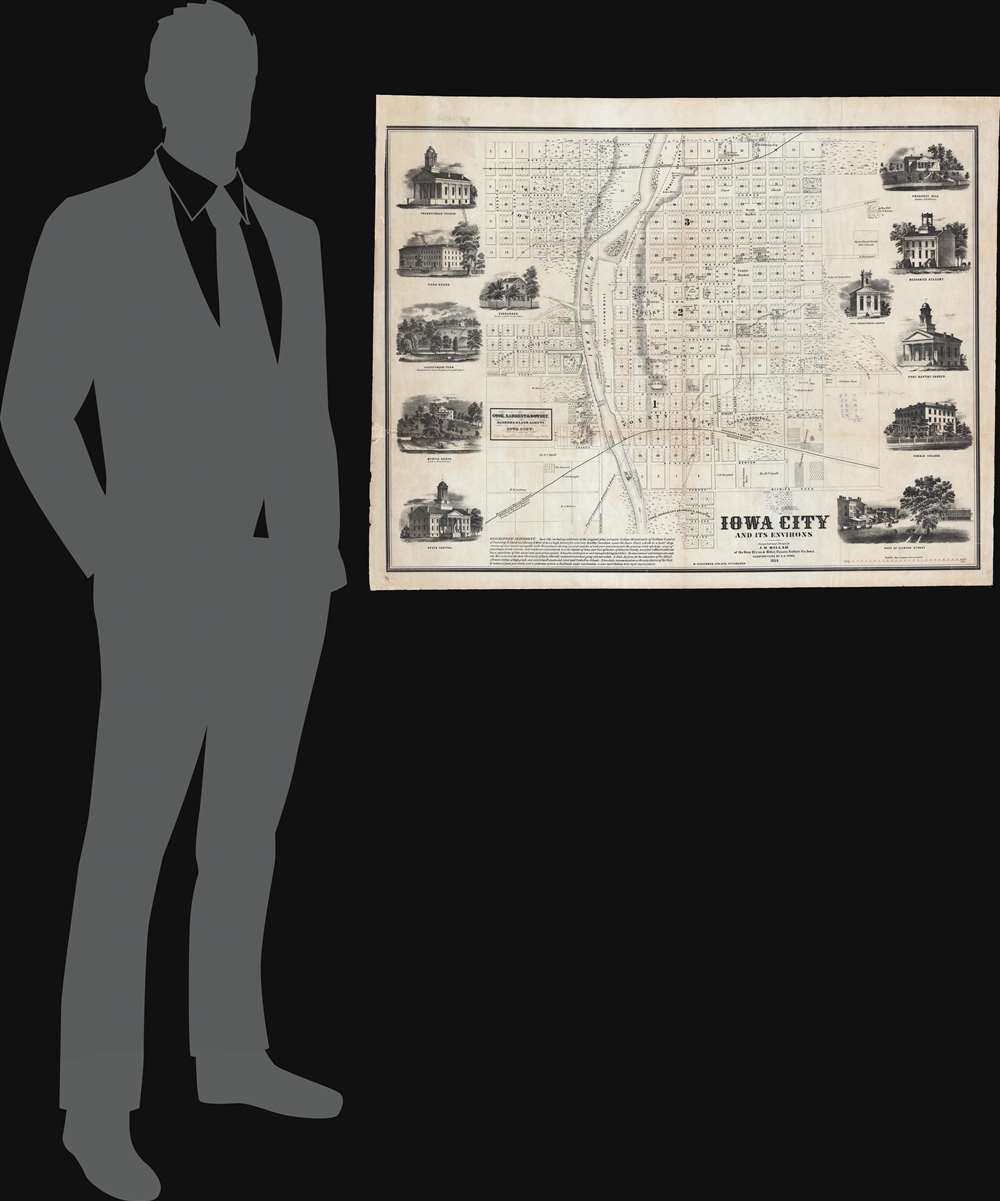 A rare and striking 1854 J. H. Millar map of Iowa City. This is only the second published map of Iowa City, issued to promote real estate sales and development in the new state capital. Centered on the State House at Capitol Squire (now University of Iowa), coverage extends throughout the centrally platted original city as well as new suburban additions then being lotted and sold. Additional details include names of gentlemanly estates, private land holdings, bridges, important homes, and even privately held undeveloped lots. The map is surrounded by vignettes illustrating civic buildings and large private estates.

The new additions include 'West Iowa City', 'Byington's Addition', 'Lyon's Additon', and, at bottom center 'Cook, Sergent and Downey's Addition.' This last suburb is likely the raison d'être for this map. Cook, Sargent, and Downey were Iowa City Bankers and Land Agents looking to capitalize on Iowa City's explosive growth. Between 1840 and 1860 the population increased by about 40%, from 3500 to 5200 - so they enjoyed considerable success in their efforts.

Iowa City was established in 1839 by the Iowa Territorial Legislature to replace Burlington as the territorial capital. The city was surveyed and platted in 1839. It was graciously situated on high bluffs overlooking the Iowa River - thus well located for both lifestyle and commerce. The territorial capital officially moved in 1841. When Iowa became a state in 1846, Iowa City became the first state capital.

The map is surrounded twelve vignette views drawn by the well-known artist George Henry Yewell. These include the old State Capitol, now part of the University of Iowa campus, Clinton Street, several churches, a 'Female College' and several impressive private estates. These were painted during one of Yewell's few longer-term stays in Iowa City, just after he finished art school in New York. He would leave again shortly after and never return for more than short visits.

This map was drafted by J. H. Millar and published by 'Bryan and Millar' of Panora. We note surviving examples at the Huntington Library, Iowa City Public Library, Library of Congress, Newberry Library, University of Illinois, and University of Iowa (July 2021). We are aware of one other in a private collection.

William Schuchman (1824 - 1864) was a German-American lithographer based in Pittsburgh. Schuchman was born in Hessen, Germany. Both his and his brother George Frederick Schuchman were '48ers' felling the failed Springtime of Nations revolutions in Germany. They immigrated to the United States in 1848, settling in Pittsburg in 1849. He is credited with issuing the first lithograph in Pittsburg, around 1850. Schuchman and his brother set up their lithographing studio in Pittsburgh in 1849. Their first advertisements appeared in the Pittsburg Daily Gazette on October 15, 1849. He was a Mason. Schuchman disappears from all records and presumably died in 1864 - in the Civil War? Learn More...


George Henry Yewell (January 20, 1830 - September 26, 1923) was an American painter, etcher, and engraver. Yewell was born in Havre de Grace, Maryland. His father died when he was a child and afterward, his family moved west to Cincinnati. There Yewell studied under the famous educator Theodore S. Pavin (1817 - 1901). In 1841, Yewell and his mother relocated to Iowa City, Iowa - then just being built as a new state capital. In 1848, Yewell apprenticed to a local tailor, but by this time had already begun to show proficiency as an artist. He issued a political cartoon about moving the capital to Iowa City that caught the attention of Charles Mason, Chief Justice of the Iowa Supreme Court. Mason and several associates sponsored Yewell to study in New York, where he became a student of painter Thomas Hicks (1823 - 1890). From 1851 to 1853 he studied at the National Academy of Design. He returned to Iowa City in 1853, where he did portraiture and landscape art. He returned to New York in 1856, reenrolling at the National Academy for further studies. With Mason's sponsorship he went to Paris, where he studied until 1861 under French painter Thomas Couture (1815 - 1879). He returned briefly to Iowa city in 1862, but ultimately the small city ould not hold him. He returned to New York, and from there, returned to Europe in 186. He took up residence in Rome, summer in Perugia and Venice, and traveled extensively, even I 1875 to Egypt. He was deeply entrenched in the European art scene. He returned to New York in the 1880s, where he remained for the rest of his life. He worked occasionally for Louis Comfort Tiffany, and spent summers on Lake George. He was elected an Associate of the National Academy of Design in 1862, and made a full member in 1880. His work is in the collections of numerous museums and private collections in Iowa, New York, and elsewhere. Learn More...