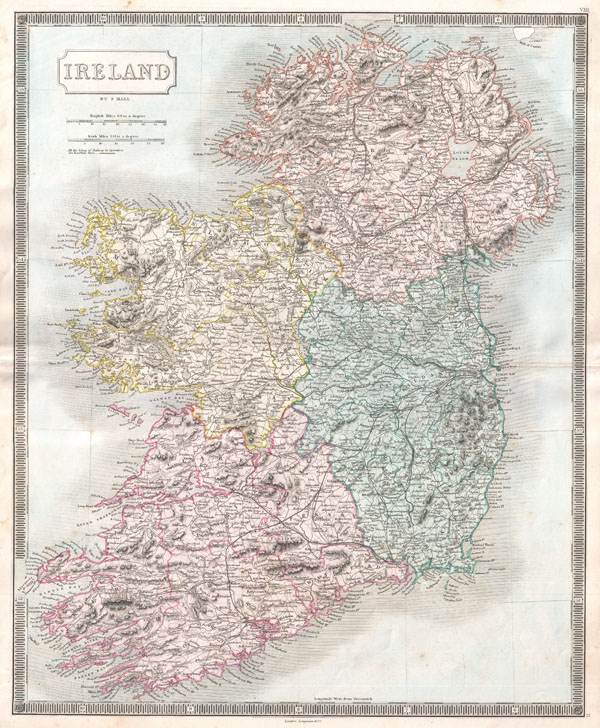 A beautiful example of Sidney Hall's c. 1850 map of Ireland. The island is depicted in full divided into its four provinces of Munster, Leinster, Connaught and Ulster. Shows cities, roads, rivers, trains and some topographical detail. Hand colored in attractive pastels. Issued as plate no. 8 in the c. 1850 Longman edition of S. Hall's New General Atlas.


Longman (fl. c. 1720 - present) is a long lived and venerable British publishing firm initially founded 1720s by Thomas Longman (1699 - 1755). Longman was born in Bristol and in 1716 was apprenticed to John Osborn, a London printer and bookseller. Completing his apprenticeship, Longman requested and was granted the hand of Osborn's daughter. Shortly afterwards Longman acquired the stock of Robinson Crusoe publisher William Taylor and, along with Osborn, established a printing office on Paternoster Row. The two published numerous works including Samuel Johnson's Dictionary. Around the same time that Osborn retired Thomas Longman's nephew, another Thomas Longman (1730 - 1797), joined the firm which was subsequently renamed T. and T. Longman. On the death of the original Thomas Longman, the nephew took over the firm and eventually passed it on to his son, Thomas Norton Longman (1771 - 1842). Thomas Norton seemed to have had a passion for partnering and over the years added Owen Rees (1730 - 1797), Thomas Brown (c. 1777 - 1869), and three more mysterious partners, Hurst, Orme and Green, to the corporation's partner list. For many years the firm published as Longman, Hurst, Rees, Orme, Brown & Green. Thomas Norton eventually passed the firm to his own sons, Thomas and William, who during their tenure bought out most of the minor partners, renaming the firm Longmans, Green & Co. Later, Thomas Longman's son took control of the firm in full naming it just Longman. During World War II most of their plates and stock were destroyed but the company nonetheless survived and went public in 1948. Longman was eventually acquired by the media conglomerate Pearson and continues to publish as Pearson Longman. Learn More...