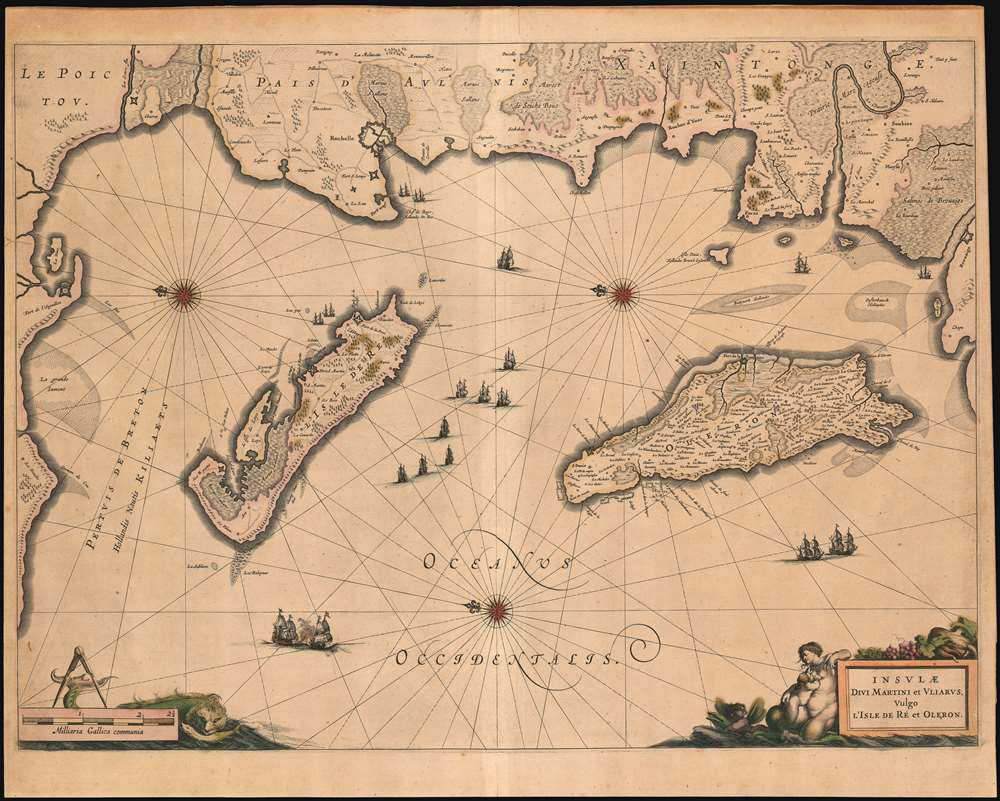 Sumptuously Engraved Map of the Home Port and its Surrounds
$600.00

An exquisite 1649 Blaeu map of the La Rochelle region of western coastal France, including the Isle de Re and the Isle de Oleron. The centrally depicted, largely Protestant city of La Rochelle was a port of prime importance for Atlantic exploration and trade until the religious wars of the 17th century. The east-oriented map shows coastal forts, roads, wetlands and salt plains. In many respects it also resembles a chart, with rhumb lines, three fine compass roses, and navigational hazards such as shallows marked. The map's rich decoration alludes to the region's maritime importance, with nineteen ships, a sea monster, and a beautiful cartouche portraying a mermaid nursing a mer-infant. The quality of the engraving is typical of the superb standard set by the younger Blaeu, this example being embellished with delicate contemporary color.

This is one of the maps added by Johannes Blaeu to the Atlas Novus after his inheritance of his father's business; consequently it is scarcer than many of the maps produced for the Blaeu atlases.

Theatrum Orbis Terrarum, sive Atlas Novus Blaeu, W., Blaeu, J.     In 1662 Joan Blaeu published his masterwork, which has been described as 'the greatest and finest atlas ever published' (Verwey, 1952): his monumental, eleven-volume Atlas Maior. This contained nearly six hundred maps, more than two hundred in excess of the Blaeus' mainstay the Atlas Novus. The former work already being renowned for the quality and beauty of its maps, Blaeu not only would add copious material but would improve the sophistication of his work: many of the newly-added maps utilized larger-sized presses and sheets, and the artistry applied to the engravings was often far superior to that of the earlier maps in the atlas - many of which by now were thirty, and some more than fifty years old. Blaeu's Atlas Maior was published from 1662 to 1672, consisting of some 594 maps compiled into upwards of 9 volumes with some editions containing as many as 12 volumes. This triumphant work's publishing life was cut violently short when, in 1672, the Blaeu's mammoth workshop was destroyed by fire; surviving stock would be sold at auction between 1674 and 1677, occasionally appearing under the imprint of later Dutch printers such as Pieter Schenk and Pieter Mortier. The maps added to the Atlas Maior, owing to their tragically short publishing life, are among the hardest-to-find of the Blaeu maps.