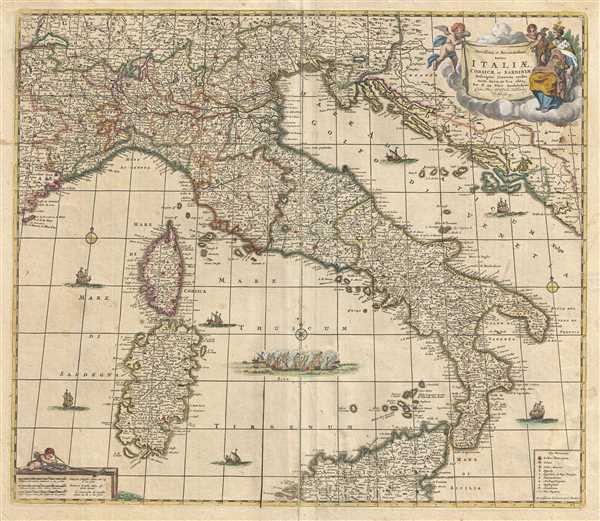 This is an attractive c.1721 map of Italy by Frederik De Wit. It covers Italian Peninsula in its entirety including the Dalmatian coast, at the time controlled by the Republic of Venice. Also includes the islands of Corsica and Sardinia and part of Sicily. The map renders the entire region in extraordinary detail offering both topographical and political information with mountains beautifully rendered in profile. At the time this map was made, most of Italy was under Spanish control. Following the War of Spanish Succession, Spain would lose many of its territories in Italy to Habsburg Austria, making Austria the dominant power in Italy.

A decorative title cartouche appears in the top right quadrant, depicting two cherubs and an emperor. The scale in the bottom left is also illustrated with a cherub with measuring instruments. Various ships can be seen sailing in the waters as a naval battle rages in the Tyrrhenian Sea. The map was issued by Covens and Mortier and printed shortly following their 1721 acquisition of De Wit's plates from Maria De Wit.