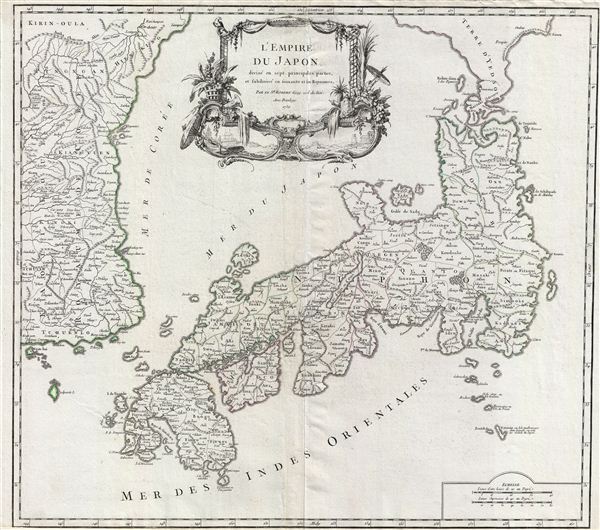 A large and beautiful 1750 map of Japan and Korea by Robert de Vaugondy. Centered on the Bay of Osaka, this map covers from eastern Korea and Ngan-Hai Island eastward to include all of Tokugawa (edo) era Japan. Hokkaido, here identified as Yedso, is inaccurately and embryonically rendered off the northern tip of Honshu. Various towns, provinces, and daimyo are noted in both Japan and Korea. The sea between Japan and Korea, whose name, either the 'Sea of Korea' 'east Sea,' or the 'Sea of Japan,' is currently a matter of historical and political dispute between the countries is here identified in favor of both countries, with both 'Mer de Coree' and 'Mer du Japon' applied to the same sea. This map was issued in 1750 by Robert de Vaugondy for the 1750 first edition of the Atlas Universel.