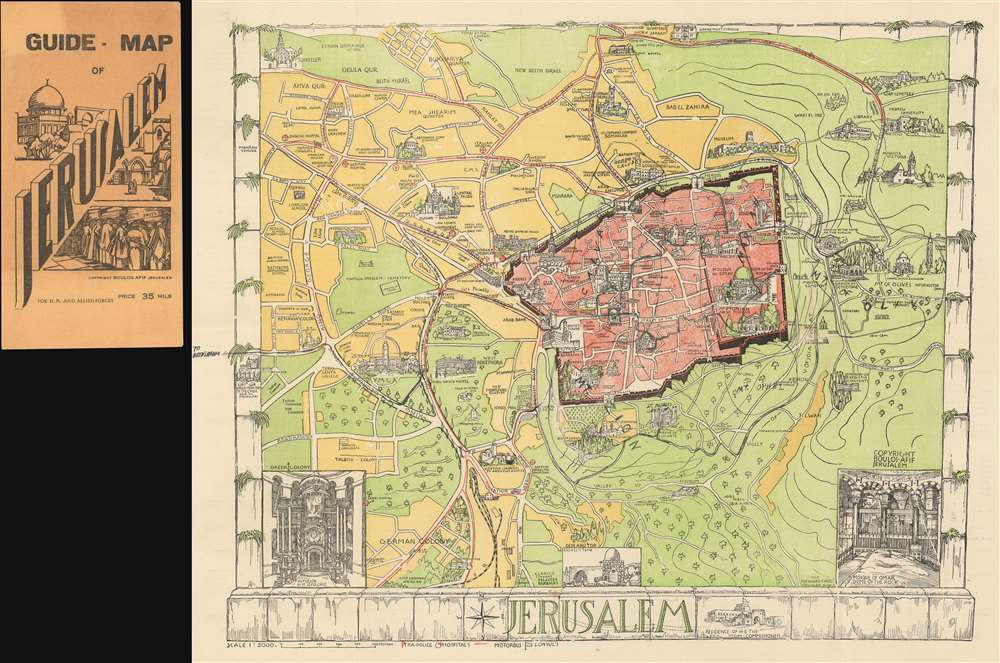 A pictorial map of Jerusalem published for His Majesty's and Allied Troops.

This is a 1935 Berhard Gauer pictorial map of Jerusalem. The map depicts the city from the Greek Monastery of the Cross to the Chapel of Ascension and the Russian Tower and from the Grand Mufti's House to the German-American Cemetery. The walled Old City serves as the map's focal point with numerous sites illustrated in profile, including the Dome of the Rock, the Al-Aqsa Mosque, and the Wailing Wall on and around the Temple Mount. The Church of the Holy Sepulcher, the Tower of David, and the Hurva Synagogue are also depicted in profile. Outside the Old City, myriad other sites, such as the Hebrew University and Library, the war cemetery, the Church of the Tomb of the Virgin, and the Garden of Gethsemane, are highlighted. Locations important to the visitor, such as hospitals, consulates, the Y.M.C.A., and hotels are also labeled. Three vignettes are situated along the bottom border and illustrate the interior of the Mosque of Omar – Dome of the Rock, Rachel's Tomb, and the interior of the St. Sepulchre. Manuscript notations in ink are present throughout the map and label the Mount of Olives and Gordon's Cavalry.

This map was created by Bernhard Gauer and published by Boulos-Afif in 1935.