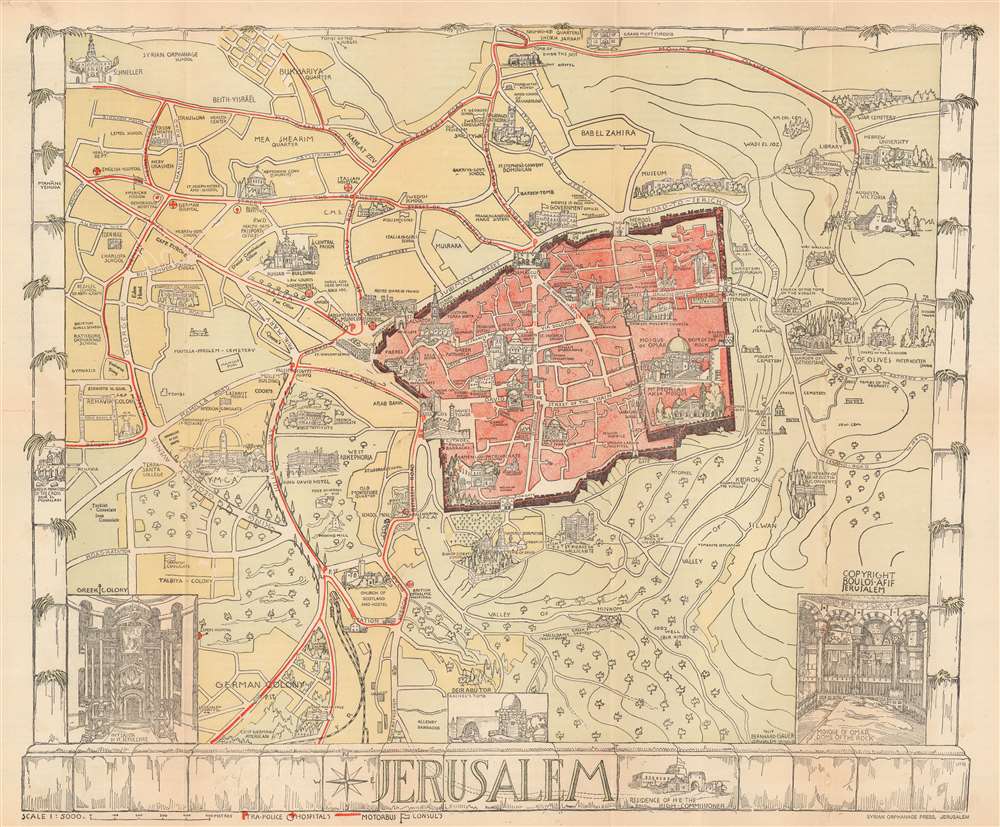 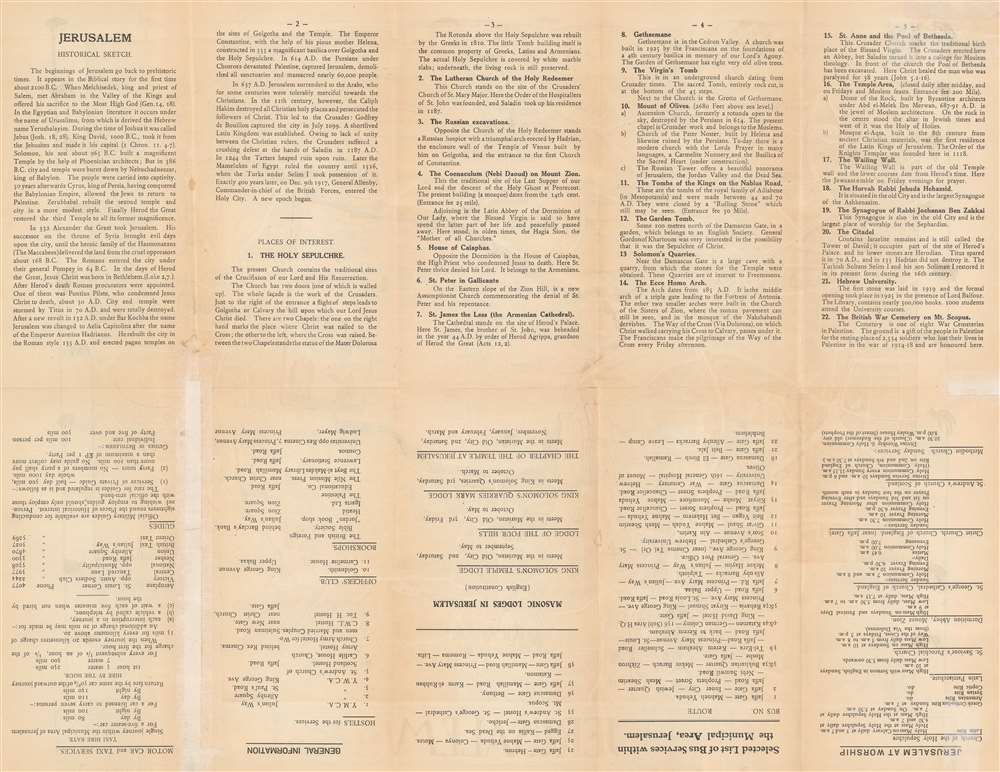 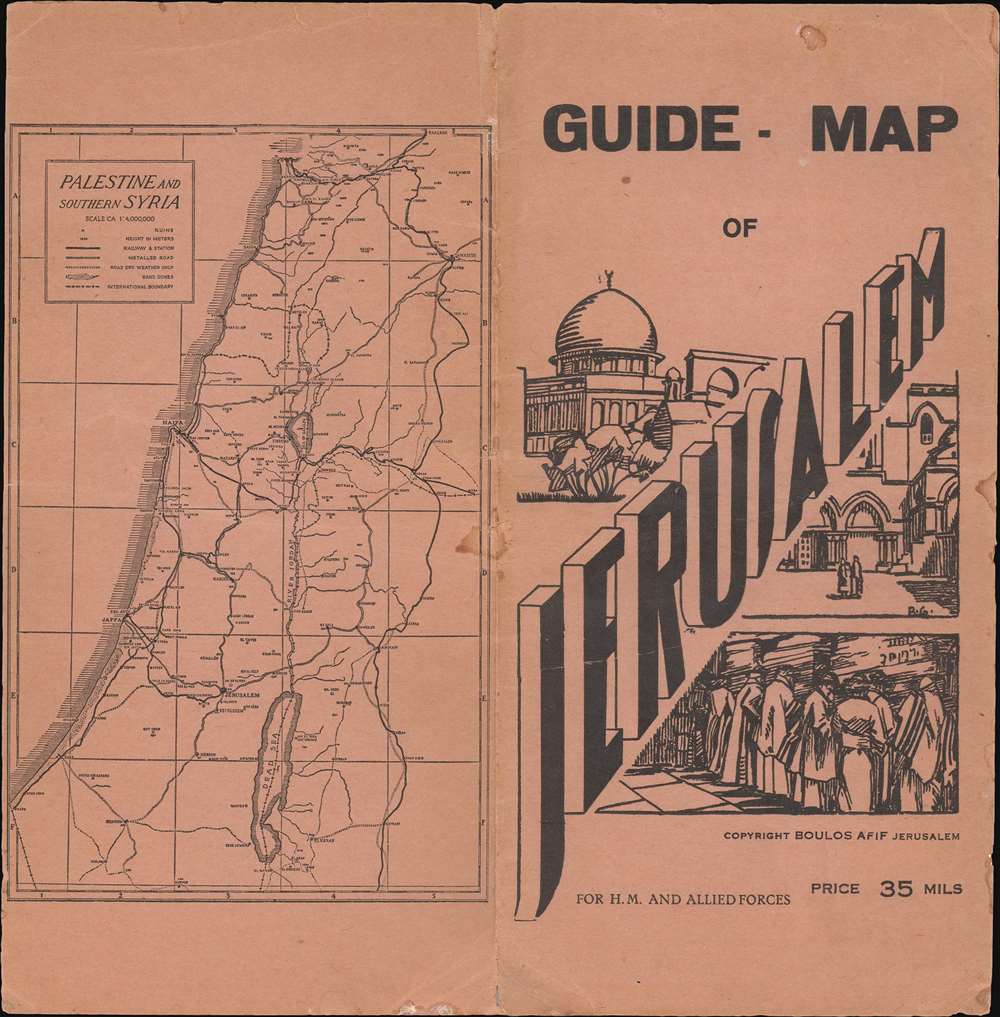 This is a 1935 Bernhard Gauer pictorial map of Jerusalem. The map depicts the city from the Greek Monastery of the Cross to the Chapel of Ascension and the Russian Tower and from the Grand Mufti's House to the German-American Cemetery. The walled Old City serves as the map's focal point with numerous sites illustrated pictorially, including the Dome of the Rock, the Al-Aqsa Mosque, Wailing Wall, the Church of the Holy Sepulcher, the Tower of David, and the Hurva Synagogue. Outside the Old City, many other sites appear, such as the Syrian Orphanage (see below), Hebrew University and Library, the war cemetery, the Church of the Tomb of the Virgin, and the Garden of Gethsemane. Locations important to the visitor, such as hospitals, consulates, the Y.M.C.A., and hotels are also noted. Three vignettes situated along the bottom border illustrate the interior of the Mosque of Omar, Dome of the Rock, Rachel's Tomb, and the interior of the St. Sepulchre.

The Schneller Orphanage or Syrian Orphange

This map was printed on the presses of the Schneller or Syrian Orphanage - featured prominently in the upper left. The Syrian Orphanage operated in Jerusalem from 1860 to 1940. It was founded by the German Lutheran missionary Johann Ludwig Schneller (1820 - 1896) after the 1860 Lebanese Druze massacre of Maronite Christians in Lebanon and Syria left thousands of orphans. The orphanage building - depicted here - was the site of Schneller's home, and one of the first major structures build outside of the Old City. The orphanage provided both academic and vocational training to orphaned boys and girls from Palestine, Syria, Egypt, Ethiopia, Armenia, Turkey, Russia, Iran, and Germany, graduating students skilled in such trades as tailoring, shoemaking, engraving, carpentry, metalworking, pottery, painting, printing, farming, and gardening. The orphanage also operated its own printing press and bindery; flour mill and bakery; laundry and clothing-repair service; carpenter shop; pottery factory; tree and plant nursery; and brick and tile factory. Located on high ground and surrounded by a high stone wall, the orphanage's distinctive onion-dome tower, multistory buildings, and decorative facades exuded the power and influence of European Christians in mid-19th century Jerusalem. The orphanage continued to operate until World War II, when the British shut it down and deported its German teachers. The British turned the compound into a closed military camp known as the Schneller Barracks.

This map was drawn by the German-Jewish artist Bernhard Gauer. It was published by the Arab publisher Boulos 'Afif, and printed by the Syrian Orphanage Press, Jerusalem. Uncommon.


Boulos (Mahmoud Sayess) Afif (1905 - c. 1960) was an Arab photographer, illustrator, and publisher based in Jerusalem in the first half of the 20th century. Learn More...